Dom and Donald Tolen are identical twins - in looks but not personality. Whilst Dom craves the quiet life, Donald has pushed the boundaries a lot more. But now, separated from his wife and living, as an increasingly unwelcome guest, in his brother's apartment, Donald needs to get himself sorted in a hurry. What ensues is a complicated tale of swapped identities and confusion that is going to need the reader to be paying close attention.

We've all heard tales of identical twins swapping places. Particularly when young, and in this reader's case, in school when one twin was much better at a particular subject than the other. Dom and Donald always did the same thing as kids, and when Donald convinces Dom to try it one more time in adult life, it kind of makes sense that he'd like to do it again as a joke or a bit of fun. But things are never quite that simple when you're an adult, particularly if there are sneaky plans afoot. Hence the need for reader's to be paying attention.

A psychological thriller, THE SWAP is written in a nicely flowing manner, taking the reader straight into the action, and through the stories of Dom and Donald. Structured well with current day and past revelations nicely balanced, the pace doesn't lag at all during this book. The likelihood of something going astray when Donald convinces Dom to switch places for the day is nothing compared to what actually does occur, nor the complications that continue from that event onwards. Although the "Dom" and "Donald" names do sound like the potential for confusion you are given license to get past that with most of the viewpoint remaining with Dom - the more sedate and quieter of the two twins.

There is a supporting cast dotted throughout THE SWAP but the focus is always on the twins, and Dom in particular so most of the extras fade rapidly into the background and remain somewhat one-dimensional. Many readers might find themselves hanging tightly onto the twins identities anyway - things get pretty complicated in that department pretty darn quickly.

It's an interesting idea for a debut novel - the knowing swapping of identities and the consequences from there. Combined with some insights into the differences, as well as similarities between identical twins and THE SWAP was an engaging read - not perfect by any means - but well worth the time and attention. 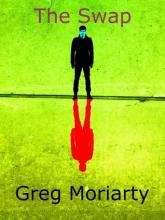 Dom Tolen craves a simple life. He keeps his head down at work, jogs off his midweek beers and busies himself with jigsaw puzzles. What riles him is his irksome twin, Donald. Separated from his wife and making his presence felt holed up in Dom’s spare room, Donald turns to pestering him to play a practical joke.

Weeks later, as Dom battles with the aftermath of the prank, a stranger calls. Her bizarre lies prove irresistible to the shattered twin. Determined to solve the mystery of her visit, Dom sets off on a perilous journey, one that will force him to confront family truths and inner shadows.

Each revelation distances him from the trouble-free life he longs for and sees him tumbling through an unnerving maze of deception, greed and murder …