Having not read any of the Vin Cooper series this started out as an exercise in seeing if I could catch up in a hurry. So, for newcomers to the series as well, a few points. Cooper's an interesting character in an over-the-top military style thriller. Definitely a bit of an all-action hero with the physical prowess and durability of a tank, he's also got a touch of humour about him that somehow makes him slightly less hard-boiled than you'd expect. It did, however, leave this reader with a sneaking suspicion that there could be more than just Cooper's tongue firmly planted in his cheek.

The scenario that STANDOFF puts him in is straight out of the wild ride handbook. Very very wild. Towards the end, positively lunatic. Oddly believable for a hefty portion of the plot, with only a couple of points at which the reader might be forgiven a slight sneaking doubt, particularly when it comes to motivation. Although that's really isn't all bad for this style of book.

Of course the violence is extreme, and the mayhem pretty full on. But back to the plot. Which is nicely evil to start off with, with the baddies very bad, and slightly mad; and the good guys very mad, and only sometimes bad. There's lots of twisting and turning, and some evil women who were, and then weren't, there just as sex symbols, and a reason for all the mayhem which was... well madder than most of the mad thriller type scenarios.

Which makes it all a bit hard to put into any context. On the one hand I really liked Vin Cooper. On the other I've no idea if STANDOFF's slightly weird plot is typical. Having said that, can't think of a single reason not to find out. 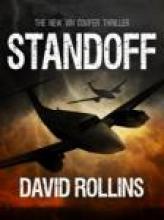