NOTHING SHORT OF DYING is the debut release from author Erik Storey, which arrived with considerable fanfare. It's flagged as something that will have Lee Child's Reacher watching over his shoulder which clearly flags this is action packed, with a lone hero up against it from all sides central character.

Clyde Barr is a mountain man, hunter and a mercenary. After many years fighting conflicts in Africa amongst other places, and a torrid stint in a Mexican jail he's heading back to his native Colorado, out into the mountains, going bush as we'd say in Australia, looking for a low key sort of life. Which all goes to hell in a hand-basket when he gets a frantic call from one of his sisters, and heads out to save the day. At this point you start to find out that Barr's personal life is anything but uncomplicated, his family is fractured, his younger sister has been a bit of a trial and just about everybody is flat out nasty or at the very least disinterested. Unless you count Allie the barmaid with a sort of heart of gold and taste for adventure, who joins him on quest, serving as companion, love interest and recently arrived conscience or reason to get his act together.

NOTHING SHORT OF DYING is really quite the roller-coaster ride, and in that I'm not just referring to the action packed, race to find and free the sister. There are many highs and lows in dealing with Barr to navigate as well. The action here is bloody and violent, there's a feeling of the wild west about the pace, and the free-wheeling bash, crash and killing spree. Whilst it's obvious that those who have taken Jen are definitely the black hat wearers, Barr's not so easy to pigeon-hole. There are times when he feels like part of the problem - with a tendency to wipe out anybody who even looks like they are going to get in his way, and times he's haunted by memories of things that have gone wrong in the past, people who he's failed to save, bodies he's left in his wake. And of course, there's a budding romance with Allie - who is carting around more than a few issues of her own.

There were points where I absolutely loved NOTHING SHORT OF DYING, and points where I'd cheerfully have flung it across a room. Whilst there are aspects of Barr's characterisation that rang true, that has to balanced up against the constant concept of anything can be solved if you shoot it, hit it hard enough, or drive around it fast enough. All of which has been done - to death - before, although undoubtedly that doesn't sound particularly fair as the same could be said of lots of thrillers. It's all going to come down to a question of connection with Barr and even with Allie. If, as a reader he's somebody you instantly feel you can barrack for, or even just understand a bit, then the quibbles will disappear. If he's somebody you're struggling with, then the lack of subtlety, and the constant bang bang, shoot 'em up, loner out to save the day, getting it wrong, getting it right and the extreme violence is going to be less successful.

NOTHING SHORT OF DYING is definitely one for readers to make their own minds up about. 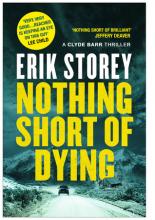 Sixteen years. That’s how long Clyde Barr has been away from Colorado’s thick forests, alpine deserts, and craggy peaks, running from a past filled with haunting memories. But now he’s back, having roamed across three continents as a hunter, adventurer, soldier of fortune, and most recently, unjustly imprisoned convict. And once again, his past is reaching out to claim him.

By the light of a flickering campfire, Clyde received a frantic phone call for help from Jen, the youngest of his three older sisters. Then the line goes dead. Clyde doesn’t know how much time he has. He doesn’t know where Jen is located. He doesn’t even know who has her. All he knows is that nothing short of dying will stop him from saving her.

Tagging along with Clyde on this strange, desperate, against-all-odds rescue mission is a young woman named Allie whose motivations for hurtling into harm’s way are fascinatingly complex. As the duo races against the clock, it is Allie who gets Clyde to see what he has become and what he can be.