It will not come as any surprise to readers of the Nell Forrest series that she's found another body. In a small town like Majic there's an astonishingly high murder rate, even though this unfortunate victim seems to have been in Forrest's backyard for a very long time. About the time that her estranged father disappeared in fact – make of that coincidence what you will. Goodness knows Forrest's going to.

If there is such a thing as a preferable time to find a skeleton buried in your backyard, now is definitely not it for Forrest. She's finally moved into her new home (she's redone the butcher shop that had been her father's); she's also dealing with her ex-husband's return to town, along with new partner and baby daughter. Two of her own daughter's are about to give birth – one with a difficult decision which seems made from the outset and her own new relationship appears to be teetering somewhere a little too close to rocks.

So situation normal as far as Nell Forrest and the town of Majic are concerned.

Needless to say there's a level of lunacy about these stories which may (or may not) connect with the reader. Somehow, for this reader, the lunacy works. Perhaps it's because of Forrest's level of self-awareness. She's really under no illusions that her life is normal, that what happens around her is par for the course, and that she's in anyway even slightly in control most of the time. Once in a while she might draw breath and have a red hot go at a bit of order in the chaos but it just never seems to last. In this outing, there's also the added poignancy of the return of her father who deserted the family when Nell and her sister were very small.

His return to the fold is complicated by the discovery of the body with it's connections in time to him; with the ups and downs of Nell's daughter's lives; and with some startling revelations about the past in Majic. The discovery that not only did your parents have a sex life (which we all know we'd often prefer to deny) but that the sex life might have been a bit more risky than anybody ever wants to hear about a parent is a surprising development. Even when it goes a bit of the way to explain some of the complications of her own mother's love life.

All of this topped up by a street renaming that has everyone laughing about Nell Forrest Close being a warning, and a lot of amateur sleuthing along with a very personal threat and there's quite a lot to FORBIDDEN FRUIT.

Delivered as always with a lighter touch, and a keen eye for life in Australian country towns FORBIDDEN FRUIT is number 3 in a series on the cozier, light-hearted, slightly madcap and extremely humorous side. Definitely one that fans of that style of crime fiction should be clamouring to read, and most definitely something that Australian readers should be seeking out. 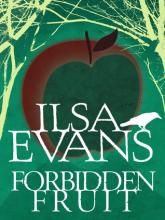 The last thing Nell Forrest expected when she tried to plant a tree was to unearth the skeletal remains of a former resident. Now her new backyard is swarming with police, there’s a television news crew camped next door, and once again she is smack in the middle of a murder investigation. And the timing is dreadful. Two of Nell’s daughters are about to give birth and she is surrounded by new in-laws with agendas of their own.

But it soon becomes clear that this time the investigation is personal so personal that enquiries bring her long-estranged father back into the family fold, and the answers shed some very uncomfortable light about the proclivities of her parents when they were young. Who would have thought that the little country town of Majic had ever been such a swinging place to live?