A bit of a surprise package, IN THE DYING DAYS is an engaging tale of an ex-cop, private investigator plying his trade on the means streets of ... Canberra.

Starting off with a bit of business about a son looking for his father's story, the action quickly shifts to Canberra in 1975. Barry Flynn is a rather down-market PI, who, courtesy of a solicitor connection, finds himself following a very wealthy, well-connected philandering husband. Weirdly though, this wife isn't looking for evidence of unfaithfulness, rather she just seems to want to know what he's up to - kept an eye on if you like.

Flynn, as just about everybody else in town, is closely following the political events of the time even as his investigation takes up a lot of time, requiring him to get some assistance from his nephew Billy. It's while watching Daniel Harrington on the campus of ANU that something is seen, the significance of which takes a while to dawn. Initially all Flynn knows is that as the Constitutional Crisis ramps up, so does his investigation. Too late for Billy though, who is killed whilst on surveillance duties. When it turns out that Flynn is being closely watched as well, things become very personal and threatening.

Obviously the stories of the Harringtons, Billy's death, Flynn's poking his nose in and the political situation all start to converge although it's done in a realistic and quite engaging manner with quite a few surprises built in along the way.

Even with a slightly flamboyant ending, there's something about Flynn's story that really works. Sadly there's also something about the idea that there's more to Whitlam's downfall that also works equally well (probably says more about our general attitude to politics these days then we should be happy about). Certainly the whole idea of a PI working in Canberra at that particular time managing to uncover something dodgy going on definitely worked.

The author of IN THE DYING DAYS has written a number of other novels, and directed a number of very well known Australian Television programs. Whilst there's something visual about this novel, it's not a screenplay lurking in the covers of a novel. There's a fully fleshed out story to be followed, and a most engaging character to get to know. Sure there's nothing new about the idea of the slightly rumpled PI in crime fiction, but Flynn's a pretty good, all-Australian, version thereof. 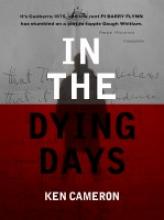 Gough Whitlam's Labor government is in crisis. Denied supply by a hostile Senate, distracted by the desperate moves of his wayward cabinet, Whitlam is seemingly confident of prevailing and oblivious to an opposition led plot to overthrow his government.

At the other end of town, Barry Flynn, an ex-cop turned private investigator, is caught up in his own struggle for survival. In a sleepy place like Canberra, there's hardly enough divorce and missing person work to cover the rent.