The fourth book in the Nell Forrest series, DASTARDLY DEEDS sees heroine Nell on a much needed holiday cruise around the Mediterranean. Except it seems that everyone has decided to go with her - her mother and her partner, her ex-husband and his new partner, her sister, a couple of daughters, and the police detective that used to be her lover. Instead of the chef and a thief though the cast also includes more locals, a class reunion, a murderer and a possible suicide.

For new readers to the series, humour plays a very big part in these books. It's a questioning, self-deprecating, observational style of humour in which almost every situation goes pear-shaped and therefore has a funny side. Very Australian way of looking at things, and something that reminds this reader of a saying my mother in law was fond of espousing "if you think life was meant to be taken seriously, take all your clothes off and look in a mirror". Can't help thinking Nell would get that immediately.

Whilst character plays an enormous part in these novels (and it's probably a series that would work best from the start as the pairings, relationships and pasts are complicated), it's not at the expense of plot. The whole series is not action based however, most of the "detecting" in these is done by way of observation and conclusion drawing, and a hefty bit of being in the wrong place at the wrong time. Not necessarily fem-jep, it always feels like Nell gets herself into daft situations because of stubbornness or even the occasional bout of daftness, but never wilfully doing something flat out stupid.

Definitely humorous and on the lighter side, DASTARDLY DEEDS is the latest offering in a series that is cosy in styling, with a touch of risqué. Populated with some wonderfully eccentric characters and situations, the whole thing makes for a highly entertaining package. 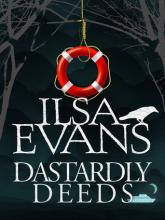 It was supposed to be the holiday of a lifetime ...

When Nell Forrest's life hits a speed bump (which is most definitely not a midlife crisis) a cruise around the Mediterranean seems like just the ticket.

Unfortunately, that's an idea shared by her mother, her ex-husband, his new partner, and a police detective with whom Nell has a stormy history. Fortunately, meditation is just one of the many activities offered aboard the luxury liner, but Nell will need more than that to face what lies ahead.

A tragic death in Rome is quickly followed by another in Turkey. Then an unexpected discovery provides a link between the two, and Nell must stow her plans for relaxation once and for all.

One of her shipmates is a cold-blooded murderer, and it seems that Nell is the only one with the wherewithal to figure it out. But figure it out she must, because the murderer, like the cruise, has only just begun ...