The third book in the Philippa Barnes series, COLD HARD MURDER is set in a spectacular region on the West Coast of the North Island of New Zealand. In the earlier books Philippa worked as a glacier guide, but the fragile state of her home area means that she has to seek work elsewhere. She gets a temporary posting as a tourist track maintainer in the Paparoa National Park, which means a move away from her younger sister and her home, to a new group of colleagues who from day one are tense.

The plot relies very much on that tension generated within a group of workmates - some of whom have been there for a long time - others blow-in's like Barnes. Because Barnes is also an outsider in this new location and cast of characters, new readers to the series should be able to start here, although the level of reiteration of detail does feel a little padded at points for anybody who has read the earlier books.

Because of that sense of a closed off environment, and a small cast of possible suspects, the plotting here is of the old fashioned mystery style, with suspicion scattered throughout, a reliance on coincidence, and plenty of clues and red herrings along the way. Unfortunately there's also a bit of threat by deliberate jeopardy which was considerably less successful and a bit too much padding around the back story, family, connections and some ancillary tracks explored. Without a doubt, the balance of context for new readers, and pace and advancement for those already up to date with the series must be an incredibly difficult undertaking, but here something felt slightly off kilter, pushed further out by the amount of coincidence used and a tendency to explain rather than simply show. Which didn't help with the perennial problems of connection and threat. If as a reader you really identify with Philippa Barnes, find her very human, flawed and well-meaning then there could be some threat in a few of the intentional jeopardy elements. If however she's not 100% convincing, then obviously her missteps are less acceptable.

The setting for this book is almost guaranteed to send you straight to Google to look up the location and there are some stunning images to reward those that do. That natural beauty is conveyed in COLD HARD MURDER, and sense of place is an interesting aspect of this book. Remote enough to create a closed room type of scenario, wild enough to provide some threat and isolation, there is shoreline, mountains and importantly to the story, an extensive underground cave system. The place definitely stands out in COLD HARD MURDER. It's absolutely glorious, which makes the contrast between humans who murder, finagle and misbehave, and the natural beauty that surrounds them a interesting comparison. 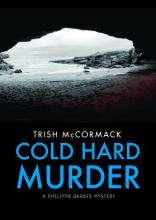 The darkness felt tangible. Like it was pressing against my blind eyes … We were going to die here. Slowly, slowly.

Two people struggle on a ledge high above the surge pool at Punakaiki’s Pancake Rocks. One falls to their death, beginning a sequence of violence as Department of Conservation ranger Matt Grey announces plans for a commercial tourism venture bitterly opposed by the local community. More people die, and it seems their murders are motivated by something more personal than a threat to the integrity of the national park. But the trail is as cold and twisted as some of the park’s most labyrinthine caves. Philippa Barnes is asked to do some unofficial sleuthing, which is not welcomed by the police. She delves into the lives of some strong-willed individuals, many of whom have secrets, uncovering a dark story that resonates with events in her own life. But caught in a desperate struggle deep underground, has she run out of time to stop a determined killer?