Review - A Briefcase, Two Pies and a Penthouse, Brannavan Gnanalingam

There's something deliciously intriguing about the idea that a top spy could lose a briefcase, which, rather than chock full of official secrets and classified documents, instead contains three mince pies, two fruit pies, the NZ Listener, a Penthouse magazine, and unfortunately a diary chock full of gossip. In a particularly unfortunate twist the briefcase is discovered by the son of a prominent journalist and, well things go decidedly pear-shaped.

Needless to say A BRIEFCASE, TWO PIES AND A PENTHOUSE is high farce. Right from the opening as poor Rachel McManus tries to navigate her way through the labyrinth of bureaucracy, revolting colleagues, and a hierarchy that can be measured in geological phases, everything about A BRIEFCASE etc ranges from gentle to raging satire.

In the early part of this novel, when everything is about the setup and the world in which Rachel and her colleagues exist it excels - here there is considerable fodder for the satirist to work with after all. Including digs at insularity in the Intelligence Agencies and politicians prosecuting their own agenda for their own reasons, regardless of the public good. There's gender conflict, downright mucky colleagues and a suspected terrorist, all of which Rachel McManus must negotiate whilst dealing with bureaucracies propensity for red tape and unnecessary meetings that will ring a bell with anybody who has ever worked in any part of any public service in the Westminster aligned world.

The styling, however, can be a little at odds with a slightly heavy handed message about all that bureaucratic bumbling, and in particular, the questions of gender conflict and sexism, so whilst the opening salvo's in the book are funny, and very cleverly done, when it comes to the denouement it seems to struggle a little to maintain the farce and get to an actual resolution. Still very well worth reading, particularly if you are a fan of raging satire, and have ever had the misfortune to find yourself trapped in a meeting, the purpose of which is to arrange yet another meeting. 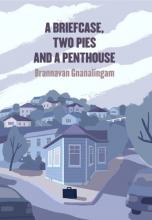 Rachel McManus has just started at the New Zealand Alarm and Response Ministry. One of the few females working there, she is forced to traverse the peculiarities of Wellington bureaucracy, lascivious colleagues, and decades of sedimented hierarchy. She has the chance to prove herself by investigating a suspected terrorist, who they fear is radicalising impressionable youth and may carry out an attack himself on the nation's capital.  In 1981, a top spy misplaced a briefcase in the Aro Valley. All it contained were his business cards, a diary of scurrilous gossip, three mince pies, two fruit pies, the NZ Listener, and a Penthouse magazine. Unfortunately for him, the briefcase was discovered by the son of a prominent political journalist. Brannavan Gnanalingam's savage new novel, A Briefcase, Two Pies and a Penthouse looks at modern day spies in New Zealand. Instead of 'Reds Under the Bed', the new existential threat is Islamic terrorism - and the novel looks at a very New Zealand response to a global issue.