AVENGER is the third book in the Alex Morgan, INTREPID series of thriller, action style novels. Whilst the earlier books (HUNTER and DEFENDER), were enormously enjoyable entrants in those categories, this third book has more to offer again.

Alex Morgan is an ex-soldier, now black ops spy for Interpol's INTREPID (Intelligence, Recovery, Protection and Infiltration Division). He's been at this for quite a while now, and frankly, he's burning out in one hell of a hurry. Despite assurances that there's a break from active service after his current assignment, he's immediately sent into battle against a shadowy villain. Chinese triads, corrupt cops and the Russian mafia and a woman known as The Night Witch are deeply involved in a very nasty form of sexual slavery. In particular, this woman is clever, very dangerous and utterly ruthless. And Morgan is also paired with new agent Elizabeth Reigns who turns out to be a lot more competent than he gave her credit for.

Now Morgan might be an all-action hero type, but there's something endearingly real about him at the same time. All the way through AVENGER he's a bit knackered. He's sick of the job, sick of the threat, sick about losing a good friend and frazzled. Even when in extreme circumstances, where his physical prowess is called upon he's fighting the enemy as much as he's fighting with himself.

In an interesting twist there's nearly as much emphasis on the Night Witch in this book. Her background, the sex slave business, and her methods are explored, as is the cunning plan she deploys to make identification and capture difficult. All of which requires Morgan to get inside her head, and her organisation to break the case.

Given the emphasis on character here, plot doesn't suffer and it's not all crash / bang / rush. There's some clever aspects to the way that Morgan and Reigns identify this woman, and track her location down. Getting inside her organisation is elegantly done, and quite feasible. Even the idea that her henchmen are more brawn than brains works well.

But it comes back to Morgan really, and there's always been a strong sense of validity about him. He's an all action hero with a human side, and that angle is what's particularly appealing about AVENGER. It's a relief to realise that a hero can get sick of the whole thing, and they, like the rest of us, sometimes just want a good lie down. 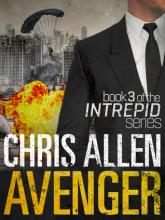 Alex Morgan is back and he isn't playing by the rules.

Policeman, soldier and spy for INTREPID, black ops agent Alex Morgan is hunting the Night Witch—the head of a shadowy criminal empire spanning the four corners of the globe and connected to Chinese triads, corrupt cops, and the Russian mafia.

When Morgan's sent to China to shadow INTREPID's newest agent, Elizabeth Reigns, he soon discovers she's been sold out and the triads are after their pound of flesh.

With Reigns in his corner, Morgan must find a way through a complex labyrinth of scattered connections and corporate takeovers to find the real Night Witch, and crush an empire built on trading in human life. But there's only one problem. To achieve his objective Morgan must confront an enemy he thought was already dead and buried. Will Morgan have what it takes to survive?