This is now the second book by NZ author David McGill that I've read, both of which share a central detecting character, and a style being a combination of true history and crime fiction. The first novel, THE DEATH RAY DEBACLE was set in 1935, and this one, THE PLOT TO KILL PETER FRASER, is in the period around the end of World War II and, interestingly, in the early days of the development of the United Nations. Peter Fraser was the 24th Prime Minister of New Zealand, serving in that role from March 1940 until December 1949. A Labour Party member, he was renowned for leading New Zealand during the Second World War. Originally born in Scotland, he moved to New Zealand at the age of 26 seemingly because of its progressive spirit. After the end of the war he turned his attentions to the formation of the United Nations and gained considerable international acclaim for his efforts and his contribution.

From this central theme, the novel, THE PLOT TO KILL PETER FRASER, rises. His making of local enemies and the existence of a plot to kill him by would-be Nazi assassins, appears to be fictional, although, it's so cleverly inserted into the facts about the ex-Prime Minister it's hard to know for sure without doing the research. As with the earlier novel mentioned above, the historical setting and the interweaving of fact and fiction is seamless and absolutely fascinating.

Dan Delaney has returned from the first novel as well. In the first he was a Temporary Acting Detective, seconded to Special Branch, the forerunner of the Security Intelligence Service. Here he's seeking a quiet life with his refugee bride, until he, and his wife, are dragged into active service by his old boss, and things start to get very complicated. Nazi assassins, British and Soviet spies, American undercover operations, Cabaret, Italian Fishing village, yachting havens, and black-market complicated.

The strong part of this novel is undoubtedly the historical setting. It's a clever idea to incorporate such an important figure at the centre of a novel like this and create a feasible plot around him and his profile. What works less well is the ancillary love interests which are supported by some seriously heavy lifting to force plot twists and turns that don't come across as particularly convincing. All in all THE PLOT TO KILL PETER FRASER was an interesting history lesson that isn't quite as well served by the thriller components as it could have been. 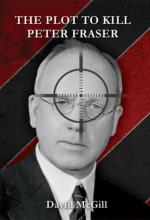 Former detective Dan Delaney returns from sitting out the war in Italian and German prison camps. All he wants is a peaceful life with his refugee bride, but his old boss Inspector Biggart needs his help, his staff disbanded by Fraser and Nazi internees released from Somes Island. The hunt for would-be Nazi assassins takes them into Wellington’s black market underworld, a defensive Italian fishing village and an upmarket yachting haven. Prodded by the Commissioner of Police, Dan reluctantly involves his wife in a dodgy cabaret scene, as Nazis are killed and British and Soviet spies Dan has previously clashed with arrive to assist a suspected American undercover operation. Dan and his wife risk their lives as they race to identify the threat before a prime minister refusing security is struck down.