It is always a pleasure to come across publishers who are bringing works from different cultures to the English-reading world, particularly when there is such a strong sense of place in the books I've been lucky enough to read from Le French Book (http://lefrenchbook.com/(link is external)). THE PARIS LAWYER has a particular French sensibility, combined with a clever take on lawyer based crime fiction.

The Parisian Lawyer is Catherine Monsigny, a young lawyer whose earliest memories are fleeting glimpses of the day that her mother was murdered. Her debut criminal trial involves an enigmatic immigrant, accused of murder, a defence harder to build because this person seems to have come from nowhere. Called out of Paris to assist her client, the case triggers Monsigny to confront her own history. Along the way she develops a relationship with a strange man who may have an ulterior motive for his pursuit of her.

One of the most interesting aspects of THE PARIS LAWYER is how what starts of as a slightly meandering, low key sort of a story, builds into something that becomes extremely involving. It's almost sneaky how the combination of an isolated location, a man with a secret and a central character with a confronting past, all combine as Monsigny's investigation into her own background and the defence of the murder accused, twist and turn together. The story deftly balances the idea of a lawyer, trial based book; with many of the aspects of a psychological thriller.

Whilst much of the standard formula of a psychological thriller is twisted on its head early in the book, and Monsigny's reveals her insecurity, there is a further twist that may or may not work for many readers. At some point in the search for the murderer of her mother, Monsigny becomes even more preoccupied with what the mother she never had a chance to know was really like, and hence who she is herself. At that point the book becomes increasingly less about the who and more about the why. What is driving many of the central characters, why they do what they do, and who they really are. For this reader it added an extra layer, and there was absolutely no reason not to follow where the author was leading.

The only other problem is likely to be in the way that many of the plot elements are left unresolved at the end of the book. Not necessarily a bad thing, unless that lack has no apparent reason. Be it to allow the reader some thinking material, or because everything in life is not automatically wrapped up neatly, unresolved elements aren't automatically an issue as far as this reader is concerned. Unfortunately here, some of the elements left hanging at the end of THE PARIS LAWYER didn't leave a question to consider, instead they contributed to the feeling of a bit of a mad scramble to the end.

Fortunately these minor problems did not lessen any enjoyment of THE PARIS LAWYER at all. It is a refreshing, different, challenging approach to some standard and not so standard crime fiction norms. 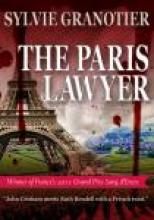 As a child, Catherine Monsigny was the only witness to her mother's death. 20 years later as an ambitious attorney in contemporary Paris, she catches a professional break when her boss assigns her to major felony case in rural France. An immigrant stands accused of poisoning her husband, but her secrets are not the only ones hidden in the scenic rolling hills of Creuse. While preparing the defence, Catherine is reunited with images of own past and a high-intensity search for two murderers ensues. Who can she believe? And what will Catherine do with her past should she discover it?