I will admit that I read a lot of books that veer towards the dark, noirish end of the spectrum, and because of that, there can be a feeling of same old same old. So when something like OUTERBOROUGH BLUES comes along, there's a distinct feeling of a dark, chilling, cold wind blowing up your spine. In a good way.

Dark and quite subdued, OUTERBOROUGH BLUES has one of those plots, and central characters, who sneak up and play with your head. Starting out the sense of loss, darkness, and dysfunction seems to be heading in a rather predictable direction, but at about the time that young Caesar ups and gets out of his family home, the action, and Caesar, take a sharp turn and head off into new territory. The story starts out quite simply, low key almost, and though it quickly goes to flashbacks and current day action, the connections between the past and the present are understandable, and informative. As his hunt for the missing brother expands, and his day to day life in his local neighbourhood continues, it all gets increasingly involving, fascinating, and refreshingly different. Caesar's has been a tricky life, as is almost required from this sort of book, but there is a substantial variation in how he copes with the hand that life dealt. He has a sense of right and wrong, a morality that comes from his past, informed by what he's lost but also by the people who he has met along the way - and the kindness that is shown, as well as the brutality and cruelness. It's this aspect that made OUTERBOROUGH BLUES grab this reader by the throat and turned it into a one sitting read.

OUTERBOROUGH BLUES is a book that feeds the readers imagination. Whether it's the wonderful sense of place and culture in which the book takes place. Sparse, clever and sensitive descriptions that give the reader a feeling for the neighbourhood, the houses, the bars, the people. Often brush stroke light, they work incredibly well. Whether it's some great characters, not just Caesar, but the supporting cast, all of whom are believable. Fragile, flawed, victims, perpetrators all, there are glimpses of real human characteristics everywhere. Fleshed out by more of those well gauged brush stroke descriptions, expanded with good dialogue which reads authentically. Regardless of how OUTERBOROUGH BLUES fires up the imagination, it does it very very well, and I am very grateful that the author offered me a copy for review. I'll be on the lookout for purchase options for the next one. 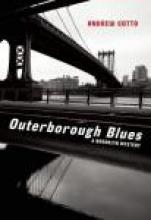 A beautiful young French girl walks into a bar, nervously lights a cigarette, and begs the bartender for help in finding her missing artist brother. In a moment of weakness, the bartender—a lone wolf named Caesar Stiles with a chip on his shoulder and a Sicilian family curse hanging over him—agrees. What follows is a stylish literary mystery set in Brooklyn on the dawn of gentrification.

While Caesar is initially trying to earn an honest living at the neighborhood watering hole, his world quickly unravels. In addition to being haunted by his past, including a brother who is intent on settling an old family score, Caesar is being hunted down by a mysterious nemesis known as The Orange Man. Adding to this combustible mix, Caesar is a white man living in a deep-rooted African American community with decidedly mixed feelings about his presence. In the course of his search for the French girl's missing brother, Caesar tumbles headlong into the shadowy depths of his newly adopted neighborhood, where he ultimately uncovers some of its most sinister secrets.

Taking place over the course of a single week, Outerborough Blues is a tightly paced and gritty urban noir saturated with the rough and tumble atmosphere of early 1990s Brooklyn.