One of the most difficult things about reviewing books is what to do when presented with a book which uses devices and has a style that is normally something I'd avoid, due to personal preference.  Doesn't mean that it's a bad book, and it certainly doesn't mean that the book won't have a legion of fans (in fact it probably should just about guarantee it).  I'm also aware that problems are considerably more obvious when there's other things going on that aren't working for a reader.

Needless to say, MURDER IN THE ABSTRACT is not the sort of book I would normally read.  In fact I'd probably go a long way in avoiding such a book, but in the event that an author is kind enough to offer a copy, I feel duty bound to read.

The only way I can think to handle this is to discuss the elements that make up the book.  Firstly the author has created a first person voice, in the central character of Dani O'Rourke.  Dani is a fund-raiser for the Devor Museum, forced into the role of investigator not just because the death of an artist occurred from the window of her office.  It's a rather brave step that - using a first person narrator.  An author is placing a lot of faith in their character to be somebody that appeals to the reader.  That's not to say that you necessarily have to like the character, but you do have to be able to get inside their head, identify with their actions and their opinions.

From there we have a plot which is a combination of a police investigation at the start which morphs into a classic amateur detective scenario.  Dani is, however, less of an investigator and more of somebody who, being intimately involved with the dead, and having that connection of her office being the scene of the crime, sort of functions as a bit of a catalyst for events that occur around her.  I'm not even sure I'd go so far as having her discover things, rather she's the sort of person who seems to cause things to happen around her, right up to the end with the grand confession scene.  I'm not sure that anybody is going to have a lot of trouble picking the why of the ultimate conclusion, but the who has a bit of a twist in the tail.

Whilst the pace of the story is very good, there are some elements to the colour and movement which don't stand too much consideration.  Why the police investigation suddenly disappears into the background.  How somebody who on one hands thinks themselves to be somehow too close to the action, can then see things that don't quite add up in her immediate environment, but never actually put two and two together and come up with some observations.  How it is that one of the major suspects in a crime freely moves around great tracts of the countryside... none of those elements quite made sense when considered clearly.

My personal problems with the book could very well be more about me than the book itself. I'm not much of a fan of light, fluffy, chatty, girly chick-lit style books - for it to work for me there's got to be a deft touch of humour, and humour is very much a personal thing.  I'm also not the sort of person who does "brands".  So discussions of handbags, shoes, clothes, fingernails, put me off... really badly, unless, again, there is a discernible sense of humour about the whole thing.  Perhaps because of those elements, I saw a lack of depth in the plot and the characterisations, which could be a whole lot less of a problem for somebody who really enjoys the overall style. 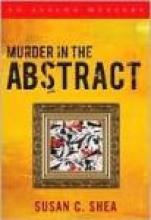 Danielle (Dani) O'Rourke's gala evening at the Devor Museum ends in a catastrophe when the body of a young artist plummets from her office window.  The police label it murder and suspect Dani, the museum's chief fund-raiser.

Self-preservation and an insider's understanding of how money moves the art world drives her to investigate who might have a motive for murder.  Dani's playboy ex-husband and a green-eyed cop complicate matters as her search moves through the fashionable worlds of San Francisco and Santa Fe.