A MAN YOU CAN BANK ON - Derek Hansen

I don't know - maybe it's because the book is set in a small country town struggling to survive (and I live 20 kilometres or so out of just such a town), or maybe it was the line on the opening page "He had the sort of body normally achieved by eating plankton.", but I was particularly disposed to liking A MAN YOU CAN BANK ON.

It's not going to come as much of a surprise that this is a bit of a romp style novel.  There's the local town bank manager, a disgraced cop sent to the outback to serve his time, the bank manager's daughter, the local animatronics expert, a bloke connecting with his somewhat tenuous Aboriginal heritage (and a wife who is Aboriginal that thinks he's hilarious), Davo who runs the fish farm, a bunch of crooks, one crook's wife and her Kiwi driver, a couple of hired killers, an insurance investigator with an energiser bunny complex, a heap of Jack Russell dogs, a couple of city Detectives, some wolves, a large crocodile, assorted Japanese and German fighters, a motor bike, a clearing in the bush, a lake that didn't used to be there, a town on the brink of collapse and 3 million dollars.  Despite a slight worry that this might all end up being a bit forced - firstly this was absolutely hilarious in places and secondly, there was a really good solid storyline in amongst the lunacy.

There are lots of delicious twists and turns in this tale - how Lambert Hampton found out about the buried millions, where he went from there, the timelines involved, how the authorities, the crooks, the insurance investigators and all can "think" they know what happened but "proving" it is a whole different kettle of barramundi.  And then there's how much Lambert is prepared to put on the line when push comes to shove and his daughter, friends and a Jack Russell need rescuing.

This book really is wonderful example of its type.  A fantastic romp with lots of action, lots of coincidences, a hefty dose of lunacy and some clever twisting and turning.  There's some hilarious images, lines and situations, but at no time does the thing slip over into farce - it's all very believable and quintessentially Australian bush.  There's some aspects which just made me cry with laughter - the way the Police Detective puts the media off the scent, the way Lambert counters with the town's reaction to the lake searching.  And then there's the animatronics.  Somebody really should remember to warn anyone new about those things.. but then again.

The only thing that worries me after finishing A MAN YOU CAN BANK ON is whether or not I can look the bloke who is working hard to keep our local town alive in the eye ever again.  I keep telling myself he's just on the board of the community bank.. he was never the bank manager... 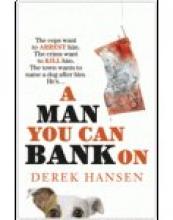 Is it a CRIME to steal from bookies?

Can you TRUST an ex-Bank Manager?

Lambert Hampton is the man the Munni-Munni locals allturn to, and for good reason.  This former bank manager helped them transform three million dollars - stolen from bookies by a gang of robbers - into a rescue package for their dying town.

But now the day of reckoning has come.

In trying to save his town, Lambert is forced to risk everything - his life, the lives of the town folk, his own daughter, ten thousand barramundi and a really lovable Jack Russell.