Reading true crime memoirs written by people you have to think of as career criminals can be a sobering undertaking. John Killick came to fame mostly because of the helicopter escape from Sydney's Silverwater prison aided by his then partner Lucy Dudko, but over many years Killick was well known to law enforcement agencies. He was a bank robber, a scam artist, a petty criminal, a bloody pest who became a violent offender. He's also a father, and a man who now openly admits he made some stupid mistakes in his life. Working now with young offenders in the criminal justice system, he's trying to provide the sort of intervention that, as a young boy, he's sure would have stopped him from choosing the path that he did.

This memoir takes you back through Killick's childhood - a much loved mother, a violent and difficult father, Killick fell of the rails pretty quickly after his mother died, way too young, and way too quickly. He certainly was an inventive crim over the years, with elaborately set up cigarette stealing stints, raffle selling scams and other assorted thieving and criminal activity. That escalated to armed bank robberies, to many failed relationships, and ultimately a significant part of his life spent in various jails in various states of Australia.

THE LAST ESCAPE reads like an honest portrayal of a life. There's a lot of detailed recollection of crimes and personal relationships. There's a litany of personal relationships hammered to death by Killick's choices in life. It seems there have been a lot of women who have had encounters with him, and interestingly he seems to remember most of them - albeit a bit too often from their physical point of view. Despite that you can't help but think that Killick's a bit of a charmer. A rogue, a crim with a shocking trail of robbery, intimidation, theft and illegal activities - but a bit of a charmer nonetheless. The fact that he's turned that charm to trying to make a difference in the lives of young offenders, this memoir being a part of telling his story, makes you want to give him a lot of points. He never once plays the "I was badly treated / it wasn't me" card. He was what he was, and he is now what he's made himself. 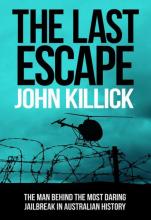 Career criminal John Killick was involved in the most audacious prison break in Australian history when he escaped from Sydney’s Silverwater prison after his partner in crime Lucy Dudko commandeered a scenic helicopter flight at gunpoint.

Australia’s ‘Bonnie and Clyde’ spent 45 days on the run before being caught… Killick was sentenced to 23 years jail; Dudko to ten. After his release, the pair meet up again but are they the same people? Is the magic still there?

This is John Killick’s story – raw, confronting and redemptive.

This is his story of self-discovery, of a wasted life of years in prison, and one which he hopes will stop other young offenders from making similar mistakes.