It's been a long time since I was eight years old, and I did grow up in the time of Trixie Belden, The Famous Five and Alfred Hitchcock mysteries, so JANE BLONDE SENSATIONAL SPYLET has come as more than a bit of a surprise.

I can see that the idea of plain mousey little Janey Brown being transformed into sensational spylet Jane Blonde with the aid of some gadgetry, some blonding of the hair, a bit of bling, a slick little silver outfit and some flashy gadgetry and boots sounds pretty good.  I can see how this book might appeal to an eight, maybe ten year old girl, although I doubt that it would stretch much beyond that age as some of the concepts are pretty simplistic.

When I was reading the sorts of books that I loved as a little girl, there was a sense that a girl could do whatever she wanted to do, regardless of what she looked like, regardless of how people tried to "pigeon-hole" her.  The heroines of my childhood solved the problem, caught the baddies, righted the wrongs with a hefty dose of brain power, the occasional bit of personal jeopardy and heaps and heaps of front!  They didn't get there with adults setting the agenda, adults "helicoptering" over their heads, and to be fair Janey does one or two brave, self-motivated things in JANE BLONDE.

Unfortunately this reader became increasingly uncomfortable as the book progressed.  The style is a little forced, overly bright (no idea if that's a style that now appeals to little girls - would have driven me to distraction when I was that age.. but things move on).  What couldn't be explained or justified quite so fairly was, however, the emphasis on the way characters "look".  Jane could only be a spy when transformed from mousey to sensational blonde, Freddie could only be a friend when he was a plain and ordinary boy, too "special" otherwise.  There seemed to be an increasing sub-text that the "look" was the important bit and the gadgetry was shiny and all very blonde and beautiful.  Given I had this sneaking feeling of disquiet anyway, inconsistencies and missed opportunities with the storylines started to become stark.

There's not enough emphasis on some of the aspects of the book that could have been fun, a challenge, something to give a girl reading the book a sense of accomplishment alongside Jane.  One of the threads of the story is that Jane has an uncle who has been secretly sending her dingbats to solve for ages.  There's not enough of them included in the book (and there seemed to be a missed opportunity with the little figures drawn in the bottom right hand corner of the pages ... flick the pages to see the animation).  Of the dingbats that are included, one's too easy and the other's purposely misleading.  Not exactly playing fair with the reader.  Why can't the readers of this book be challenged by a real puzzle?

As you can probably tell I was hugely disappointed by JANE BLONDE.  So disappointed I sought a second opinion from the bloke around the house.  Neither of us were particularly impressed, both of us (unprompted) came away with the same sense of disquiet about the message that this book seems to be sending.  Maybe we're over-reacting (we're probably old enough to be grandparents after all...), but still, it would be nice to think that out there there are little girls who think that how they look is the least important thing in a world that needs a lot of wrongs righted. 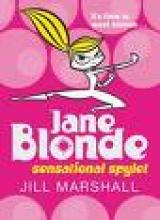 Until now, you have been just plain old Janey Brown.  But you are going to grow and grow.  You will be what your parents have not allowed you to be.  It's in your past.  And it's in your future.  There's a whole new part of you just waiting to burst out.

You are JANE BLONDE - sensational spylet.  Welcome to our world.