I blamed Chris Allen for a lot of things whilst I was reading this book. Dog's were left hoping for games and walks. Not my fault. Cat's balefully batted toys on sticks with nobody holding onto the other end. Nothing to do with me. Pet pigs resorted to throwing their food bowls around in the air because their giant tennis ball wouldn't throw itself. Who me? It was actually rather too easy to ignore all but the bare essentials around the place when deep in the second INTREPID book - HUNTER.

As in the first book, and as you'd expect of this format, the central character Alex Morgan is a minor superhero. His major superpower appears to be the ability to shrug off levels of physical damage that would have the normal person at least mutter OUCH quite a lot, if not demand a good long lie down in the closest Intensive Care facility. It's also a given that Morgan will be a bit of a loner, not necessarily looking for love but quite happy to take it if offered. So, you probably get the idea, we are talking high energy action, a fair amount of physical prowess and a hefty bit of romantic interest.

Whilst there are a lot of elements to the plot that aren't that unexpected, setting the action within the remit of the Hague Court and the Serbian conflict is an interesting twist, and it provided some options for insight into some of the brutality of that conflict. It also created a very realistic scenario for INTREPID to be operating in (the organisation that Alex Morgan works for).

In a slight difference from the first book, the romantic interest here is more prevalent at the end which might appeal to some readers a little more, and whilst the level of action was as strong, the punishment that Morgan endures did seem to be much more extreme. This time out, the plot seemed surprisingly feasible, even the slightly James Bondish gizmos and gadgets deployed at points. What works the most is undoubtedly the action scenes though. They are incredibly good, and even if you do, at times, think there is no way Morgan should be able survive this, you really don't doubt one little bit that he does. You don't mind when he prevails against everything, when he catches all the baddies, deploys whatever gizmo the INTREPID version of Q has magic'd out of the ether and somehow you don't even mind so much when it looks like he might even get the girl. 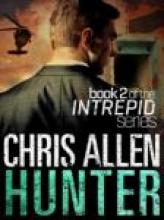 His orders are simple: ‘The safety catch is off. Return that girl to her family and drag those bastards back to justice. Dead or alive. It makes no difference to me.’

Alex Morgan – policeman, soldier and spy for Intrepid, the black ops division of Interpol – is on the hunt for Serbian war criminals. But these guys were never going to let it be that simple. An assassination attempt is made on the presiding judge of the international tribunal. Days later, the judge’s daughter, the famous and beautiful classical pianist Charlotte Rose, vanishes in mysterious circumstances.

The girl is not just a pretty face and the daughter of a judge, however. She’s also the goddaughter of Intrepid’s veteran commander, General Davenport. It’s up to Morgan and the Intrepid team to track the kidnappers and the missing woman before the very fabric of international justice is picked apart at its fraying edges.

Part James Bond and part Jason Bourne, Alex Morgan must walk the line between doing the right thing and getting the job done. And this time he’s got permission to make it personal.