When I was a little girl my grandmother always used to say to me ... you'll understand the generation gap when you get to my age. Frankly I thought she was barking, so if she was alive now I would be apologising furiously for the scepticism. And it's not just that modern music has no lyrics and all sounds the same these days ;), it's increasingly becoming the occasional book that makes me realise that I may not necessarily "get" what's going on with the younger generations.

Of course that feeling's not helped by the premise of CHASING THE SUN. "A twisted tale about Feng Shui, vampires, drinking, pet psychiatry, genocide, belief and mortality". But hey, I've read vampire novels recently that I liked - why not this one?

I have to say CHASING THE SUN did not start out well. Whilst I realise that the voice was probably very authentic, that low level, disengaged, not bothered sort of style drove me utterly and completely nuts. It was just too cool to sweat, which I know is realistic, but would you buy a give a damn card please. I also realise that to get these books you have to accept that vampires live amongst us, hanging out at nightclubs, picking up mostly women, using abusing and casually discarding bodies... but don't get me started on the morgue attendant side of things. What I don't quite get about CHASING THE SUN is the level of disengagement from the acts exhibited.

To my mind reading fiction is entertaining, enlightening, informative, amusing, life-changing or just flat out good old time wasting in the very best sense of the words - a chance to escape and disappear into better, interesting or different worlds. But it has to be engaging, believable and preferably not overtly manipulative or derivative. With CHASING THE SUN I absolutely got that the voice wasn't one I would find all that engaging, and the whole premise wasn't believable which should have been okay. I was happy that our central character at some stage did meet a young child and her mother, and undergo some sort of transformation, and yet, somehow the whole package was creepy, convenient, and way too disconnected for my liking.

Part of that was undoubtedly the lack of engagement with cause and effect. Given that most of my reading choices are at the darker end of the Crime Fiction spectrum there's nothing new in violence, victim exploitation or killer disconnection. But in good examples there is something else - there's an attempt at explanation, analysis or understanding, there's justice or retribution if you're into that sort of thing. There's even resolution in some cases. But the level of disengagement, the total and absolute lack of empathy and emotional maturity alongside the nothingness of the outcome ... was too simplistic, too dismissive, almost too easy a way out.

I can see that there's a real attempt at humour at the base of the storyline of this book, but try as I might I couldn't find it funny. The central character wasn't somebody I ever warmed to, and whilst I don't want to approve of every character in a book - in this one I never even got a glimmer of understanding or acceptance. For some reason something about CHASING THE SUN just creeped me out and I suspect that had a lot to do with what seemed like a real life current problem. Lack of empathy, lack of engagement, lack of consequences. It might be that this a book for a different generation, or for more welded-on fans of the uber-cool urban vampire thing. 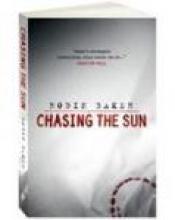 "The best way to blend in is to stand out."

A twisted tale about Feng Shui, vampires, drinking, pet psychiatry, genocide, belief and mortality... In this darkly comic, slow-burn fantasy thriller, nothing is as it seems. A nightclub opening becomes a fight for life and the discovered fountain of youth hides a movement to exterminate a race.