There's something immensely satisfying about reading a book that tackles some very tricky subject matter head-on, with enough of the gory details to illustrate rather than titivate and just the right level of gallows humour. BROKEN SKIN is the third book featuring DS Logan McRae and it's as good as the first two.

It's February and it's raining again. McRae is on DI Steel's team and they are most definitely not at home to her favourite term for a complete disaster, particularly as DI Insch is well on the outer. There's also an awful lot going on. There's a vicious, nasty and cruel rapist - slicing up his victim's faces with a knife, but while PC Jackie Watson is taking that particular investigation very very personally, in the early morning, the blood-drenched, horribly injured body of a man is dumped outside A&E at the local hospital. There's also a massive upswing in burglaries and a major drug investigation.

The dead man is only identified when one of the PC Rickard says that he's recognised a distinctive tattoo in explicit sex films that could be connected to the death. Unfortunately for his sense of gravitas, Rickard also seems to have very direct connections to the local bondage community and, from the victim's injuries, it's very likely so did he.

Most of the characters from MacBride's two earlier books, Cold Granite and Dying Light are back - all behaving very much to type and all getting in each other's road and up each other's noses in equal measure. The twist in the focus for this book is that both DI's have equal exposure, they are both forefront and not liking each other's presence one little bit. McRae and Watson's personal relationship is ongoing but is, in a beautiful touch, going nowhere happily. All the other members of the investigation team endure just the right amount of success, failure and merciless ribbing.

As well as those characters, the taut storytelling in BROKEN SKIN carries you along the manic multiple threads, with a really realistic feeling of a cold, wet, miserable city full of cold, wet and miserable criminals and equally cold, wet and miserable police officers. The humour is again dark, savage and thoroughly engaging - DI Steel has got to be one of the all time great offensive women, and this reader in particular, thinks she's marvellous.

Being the third book in the series, the characters are now very well established. Reading the first two books will certainly give you the background for many of the relationships and the antagonisms. Whilst that will definitely help with some of the minor threads going on, it's probably not 100% necessary, particularly if you are the sort of reader that can just accept that there's some tension and not want the details of what lead to that.

If you're a fan of the no holds barred, character driven Police Procedural, then you should definitely read BROKEN SKIN and both earlier books if they've somehow passed you by. Gruesome subject matter delivered with deftness is the mark of this author's books. Savage, dry humour is the other common factor. Logan McRae's one of those characters that you certainly wouldn't want to work with - the pace that this book maintains would kill a normal human being - but he's the sort of character you'd like to have a beer with, provided you could handle the quantities. 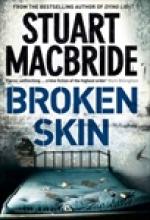 There’s a rapist on the streets of Aberdeen and the violence of the attacks is escalating. Police fear sooner rather than later one of the victims will die.  While Detective Sergeant Logan Macrae’s girlfriend is acting as bait, Macrae is working on finding out who is responsible for inflicting the wounds on a body dumped outside the hospital.