"So much to make me twitch, so little to have worried about" would have to be the short version of this review.  The blurb on BORN TO RUN didn't bode well to be honest.  Politics in thrillers, a bit of pushing the envelope with the chance of the first woman to win the White House.  An Australian software whiz, a TV journalist digging for dirt, and terrorists working on a daring attack on New York City and I'll be honest, I felt an urge to yawn.  Never got a chance.  It is undoubtedly the mark of a very good thriller that all of the unlikely elements of the plot, all of the potential cheap targets of the scenarios disappeared.

Okay - so you get the picture.  I mostly enjoyed BORN TO RUN.  So why?  Whilst sticking close to the thriller theme, the book also manages to provide some reasonably indepth character studies of the main character and those around her, who end up influencing (positively and negatively) Diaz's political rise.  I liked the political, legal and personal twists and turns that went for and against her - they seemed feasible, believable, unexpected in some ways.  I believed the background machinations, even though some of them did seem to head off into extreme territory, the story was well delivered, tight and paced enough to not give you a lot of time to stop and think too deeply.  The book had an entertaining style about it, forward momentum and some great scenarios pulling the reader into it.

What didn't work quite so well was an episode of extreme fem-jep, telegraphed in the setup into the bargain.  Despite explanations and justifications, it seemed too out of character, reeked of story-arc opportunism, and fell rather flat.  The outcomes, despite the journey to get to them, worked reasonably well though, as did parts of the resolution, whereas other factors - helicopters, luxurious resorts and a bit of sexual intrigue - did come off a little too "James Bond" at times.

But really, despite those minor quibbles, in the main I did like BORN TO RUN.  It's a book that has to be taken very much at face-value.  It's not attempting to tell you much about the human condition, although it does cast light on the fragility of political ambition.  It does give you an interesting take on somebody who seems to be genuinely trying to do the right thing, there's action, there's the requisite rushing around and lurking baddies.  There's emotion and people putting right the ills of others, and at the centre of it all there's the great American dream.  Born into poverty and abuse, surviving and thriving despite every obstacle put in her road, Isabel Diaz clings to the dream of being the first woman to win the American Presidency come hell or high water. 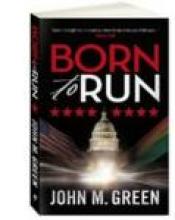 Isabel Diaz is set to be the first woman to win the White House.

But her chances plummet when a Muslim protege is accused of syphoning funds to terrorists and, seemingly unrelated, an Australian software wiz is tossed off a London skyscraper.

Then, when a TV journalist digs up a dark secret from Isabel's past, her presidental hopes shatter.