Agatha Raisin and the Fairies of Fryfam, M.C. Beaton

Never let it be said that a hefty spot of irritation with all the "will they / won't they" marriage twaddle and the constant repetition of Agatha Raisin's personal appearance stops me from sticking with the audio of this series.

Goodness knows why, I suspect I've just got into the habit, although I will admit I do rather like Penelope Keith's reading style, and these are nothing if not exactly brain teasers so they've become the standard backdrop to wrestling with the sewing machine or yet another long haul drive to the supermarket.

In this outing Agatha has rented a cottage in Norfolk to get away from the ever present James longing (and followers of this series have something in store for them on that front!), but Norfolk, peace and quiet, two cats in residence (don't panic the third one it seems is now with Mrs Simpson back in Carsley), no central heating, a pub with no food, and a lot of locals behaving with what seems to be the requisite amount of "English eccentricity" for this series. Add to that a johnny come lately pair of not quite rights that have bought the local manor, a bit of thievery, a spot of murder, a loathsome cleaning woman and a bit of alright in gardening attire, Sir Charles and some good old fashioned putting it about (in the standard manner of Sir Charlies), and you've got a classic Agatha Raisin with the required bit of personal jeopardy and some cat induced panic into the bargain.

Look I like listening to these. I've no idea why, but they really are the lightest of lightest entertainment if you can stand the oddities, all the "James" twaddle and the repetition. And I doubt I'm alone in hoping like hell that Agatha wakes up and realises that a bit of unpredictable fun with Sir Charles would be highly preferable to time spent with that appalling stuffed shirt, and tiresome bore, James (tiresome bore, god I'm starting to sound like these books now as well....). 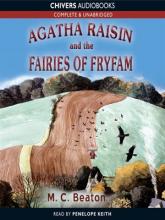 When a fortune teller from a previous case informs Agatha Raisin that her destiny--and true love--lies in Norfolk, she promptly rents a cottage in the quaint village of Fryfam. No sooner does she arrive than strange things start happening. Random objects go missing from people's homes, and odd little lights are seen dancing in the villagers' gardens and yards. Stories soon begin circulating about the presence of fairies.

But when a prominent village resident is found murdered, and some suspicion falls on her and her friend Sir Charles Fraith, Agatha decides she's had enough of this fairy nonsense and steps up her sleuthing for a human killer.

The prickly yet endearing Agatha will have fans dangling in suspense: Will she catch her crook--and a husband?