One of my recent audio book listens, THE CONSEQUENCE by Gabriel Bergmoser features hardman, rogue ex-cop Jack Carlin who's the sort of bloke that finds running thugs out of town, and handing over all of the money they'd stolen to a struggling kid de rigueur. The drug cartel, whose money it ultimately was, isn't quite so laid back about the whole thing, and their idea of revenge is swift and deadly.

Leaving Carlin with a couple of big problems - a guilty conscience and a desire for some revenge of his own. Hence the title of this hard-boiled, hard-nosed, gritty outing available from Audible.

It's a fast paced novella (just shy of 4 hours listening time), full of morally ambiguous goings on, gritty and pointed, dotted with some non-too-deep introspection, bucket loads of violence and mayhem, and a mandatory fraught family backstory to give Carlin a bit more depth than you'd originally think was going to show up.

The hassle with all audio books of course, is the voice of the narrator, and this one comes with an Australian accent so broad I was tempted to look under the couch for the ghost of Chips Rafferty. It might be that this alone makes for a bit of a challenge for younger readers / listeners used to a more urban version of the local lingo. But press on if you can, the story is worth it and it really feels like a movie script in the making. 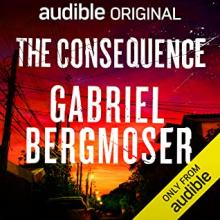 To rogue ex-cop Jack Carlin, running a thug out of town and giving his stolen money to a kid struggling to escape the criminal lifestyle is all in a day’s work. Until it turns out the money belonged to a dangerous drug cartel seeking revenge against anybody who might have been involved in taking what was theirs.

With his act of charity ending in bloodshed, Jack won’t let the killers – or his guilty conscience – go unpunished. But how far is he willing to go to enact his own revenge plan? And what happens when the consequences start to hit a little too close to home?

From the best-selling author of The Hunted, The Consequence is a tense, darkly funny thriller about the limits of taking the law into your own hands.