Immersive, almost meditative listening, I started John le Carre's A PERFECT SPY in Audio version recently, and was amazed by it. Partly a spy thriller, but really it's a character study in two parts. Magnus Pym, a young boy growing up with a con-artist for a father, who has become a successful officer in British Intelligence, marrying a fellow member of the service, having his own child, disappearing, holed up in a second life, in a bed and breakfast, with a new identity and an alleged book to write. The other the story of a con-man father, Rick, a man of huge appetites, mostly for the dodgy, a spectral figure that dashes in and out of the life of young Magnus, leaving confusion and chaos in his wake, adored by his son, never quite understood by that same son, leaving a legacy that's impossible to define.

Meanwhile, as the blurb explains, the grown up Magnus has vanished, leaving all sorts of questions behind him - who is he, who was he, who owns him, who trained him, what's he up to? I love this line from it "the reader joins Pym's pursuers to explore the unsettling life and motives of a man who fought wars he inherited with the only weapons he knew, and so became a perfect spy." Shadows and secrets, deceit and deceptions abound, brilliant listening as it quietly, almost hypnotically sucked in this listener to the point where it became absolutely addictive, in a low key, understated, deceptive way. 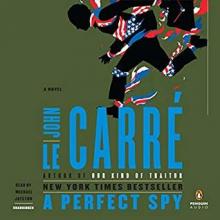 As the search plays out, so does a chain of clandestine operations surfacing in Washington, Vienna, Prague, London & Berlin.

But the most powerful drama of all comes from exploring Pym's background--his education as a spy, & the spectacular motives & mentors who transformed him into a master of guile & deception.