The second in the Maigret series (although there's some suggestion it could be the fourth although I've done zero fact checking one way or the other), this one really re-affirmed my decision to go right back to the start, and work my way through the audio versions of this series (the anti-semitism and casual racism in the first one nearly derailed the quest). Of course the timing of this series has to be taken into account so this time, so the vaguely censorial nature of the commentary of the victim, and the "set" she socialised in was sort of to be expected, although the slight sense of "longing" that came through in Maigret's observations wasn't what I'd expected at all.

Considerably more observational and reflective than the earlier entry as well, this is Maigret as I remember him. Standing in the pouring rain, or leaping onto a bicycle and heading up and down the canals, he's dogged and determined, but he's also almost funny in some places. And there are digs all the way through - brazen fleshed womenfolk protecting their men; a louche British colonel and his mistress; a retinue of people attached to the pleasure yacht that stands out amongst the working canal boats; and the hedonistic lifestyle of the pleasure seekers as opposed to the workers of the canal. At the centre of it all the pipe in mouth, pensive Maigret, sorting his way through a myriad of small, inconsequential bits of information to find the solution to how and why a well-dressed, glamorous woman like Mary Lampson (third wife of the aforementioned British colonel) ended up strangled in a stable wearing, of all things, her pearl earrings, a stylish bracelet and white buckskin shoes.

All in all this outing was considerably more enjoyable than the earlier novel - it flowed really well, it was well constructed for audio, with a plot that you could really keep up with, and a storyline full of observations and descriptions that really drew out the sense of place and time (it seems Simenon was a boat enthusiast himself so he must have written what he knew about the people and canal life). 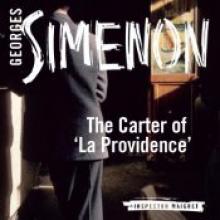 What was the woman doing here? In a stable, wearing pearl earrings, her stylish bracelet and white buckskin shoes! She must have been alive when she got there because the crime had been committed after ten in the evening. But how? And why? And no one had heard a thing! She had not screamed. The two carters had not woken up.

Inspector Maigret is standing in the pouring rain by a canal. A well-dressed woman, Mary Lampson, has been found strangled in a stable nearby. Why did her glamorous, hedonistic life come to such a brutal end here? Surely her taciturn husband Sir Walter knows - or maybe the answers lie with the crew of the barge La Providence.