SPRIGS by Brannavan Gnanalingam is a searing expose of white, male privilege and the brazen underpinning of enablement and support that seemingly encourages, and if required, covers-up the actions of young men. Trigger Warning: It's about a gang rape, young men and an even younger victim. It's about racism, difference, toxic masculinity and cover up culture. It's a timely novel, it won the Ngaio Marsh Award for Best Crime Novel in 2021 and it is exactly the sort of book that is required right now.

Written by a male author, it's about the damage that boys, young men - in this case private school, elite sports types - can do to anyone who is different from them. And in particular the damage that their entitlement can do to young women. The voices are well executed, the setting and the build up believable and the inevitability of what happens devastating. In the book's acknowledgements, the author makes particular mention of the past trauma that influenced, in particular, part 4 of the novel, which before understanding that was moving, after knowing, it becomes devastating. It's raw, frank, and speaks volumes of the struggle of a teenager trying to process events like those in this story.

It's not an investigative novel however, SPRIGS is all about the lead-up to, and the consequences of a savage, life-changing attack on a young girl who was unfortunate enough to be caught up in the tidal wave of celebration of school sports, who wasn't looked out for, wasn't supported, was different. Priya is fifteen years old when watching a rugby game from the sidelines sets in train a series of events that are all too easy to imagine happening, all too easy to imagine the aftermath - the cover-up, the victim blaming, the utter and complete bastardry of a bunch of people who should have done better, could have done better, would have done better had they not been supporters of / participants in / fallen for the privilege, the acceptability of toxic masculinity, the not my problem narrative that was there, just under the surface the whole way through this story.

Obviously SPRIGS is a novel right of this time, when eyes are being forced to open, appalling behaviour is being called out, and consequences are being delivered for more toxic masculinity and rape culture. Having said that, there's a hell of a long way to go with all of this, and SPRIGS isn't a preachy or high-handed novel. Instead it's measured, scathing, sarcastic, pointed, witty and all the more searing because of that. 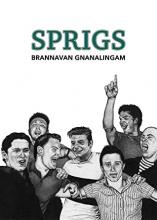 It is Saturday afternoon and two boys’ schools are locked in battle for college rugby supremacy. Priya – a fifteen year old who barely belongs – watches from the sidelines.

Then it is Saturday night and the team is partying, Priya's friends have evaporated and she isn't sure what to do.

In the weeks after 'the incident' life seems to go on. But when whispers turn to confrontation, the institutions of wealth and privilege circle the wagons.