Based around an event that followers of the Underbelly wars in Melbourne will likely recognise, this tale is the second outing for Detective Sergeant Rory James, based in part in the Bendigo region.

The first book in the series A VINTAGE DEATH was set firmly in winemaking region of Heathcote, with the action interwoven into the history of the place. WETLAND takes a slightly different tack in that James is still involved in the Bendigo region, and there are aspects of the action that take place in the area, but the feel is more Melbourne-centric this time.

There's an intriguing idea at the core of this - an accidentally overheard conversation - deep in a wetland area late at night, obvious connections drawn but reluctance to get involved on the part of the evesdropper, which is eventually eroded by the offer of a big reward for information 10 years later, leading to game of cat and mouse while Josh Marshall and his partner, lawyer Martha Portilo, try to protect their anonymity and their lives as it turns out.

Tackling the underworld, corrupt cops, hitmen, and the idea that reward money is what it takes to bring people out of the shadows, WETLAND is a big undertaking. At the core of the investigation is DS Rory James, he of the recent marital breakdown, the messy home, the sometimes tetchy relationship with his daughter, and the longing for more time with his girlfriend who remains resolutely living in her glorious old house come B&B in Bendigo. There's a precarious balance maintained between the personal and the professional, although readers who have undertake both books might find some repetition and not necessarily a lot of forward movement in these threads.

Taking the action out of the location and background that the first book explored is an interesting undertaking. It's created less of a local feel to the story, but opened it up to the Underbelly context of the plot, although from a purely personal point of view I liked the idea in the first novel where the local history and community was a big part of the goings on. As with the first novel there are still some minor quibbles with WETLAND. A tendency to repetition in sentences, a lot of ground that's covered multiple times, and perhaps a little too much made of the newly single man lifestyle.

Fans of localised storytelling would do well to have a look at these sorts of series novels though, there are too few of them popping up about the place, and I was pleased to note in the acknowledgements that the first novel and this one have found a new home at Accidental Publishing. 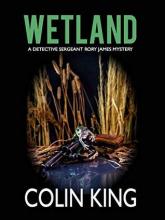 When a Melbourne couple in witness protection are found assassinated in their bed, zoology student Josh Marshall recognises the address. He quickly realises he had inadvertently been an unseen witness to a bent cop divulging the couple's location to the hitman ... and he has the hard evidence to prove it.

Coming forward and ending up in witness protection himself was hardly an option, that is until, a one-million-dollar reward is offered on the tenth anniversary of the killings. Is there a way he and his partner, lawyer Martha Portillo, can obtain the reward without ever revealing their identities?

Not without re-igniting lethal suspicions amongst the perpetrators. And not without the scrutiny of Detective Sergeant Rory James, returning to duty to face his own demons. His irresolute probe as a still-disparaged colleague winds through Bendigo, Bundoora and St Kilda to an unlikely faceoff in Margaret River.