You're Never the Same, Bill Bateman

Bill Bateman, author of the Vince Hanrahan series, was a rural based GP himself, and that shows. Both in his affection for the town, the people and the depiction of the day to day life of the slightly harried GP, but mostly in the way that some presentations are never quite what they seem and a bit of determined digging is often required. YOU'RE NEVER THE SAME is the second book in this series, following on from HARD LABOUR which came out in 2017.

Vince was a big-shot OBY/GYN in Melbourne until one disastrous patient outcome saw him banned from specialist practice, exiled to Warrnambool on the southwest Victorian Coast, working as a GP under the strict supervision of the Medical Board. Along the way he separated from his wife and twin daughters, but kept his beloved Deefer (dog), his elderly Volvo and has started to make some friends and contacts in the town that he know seems, granted reluctantly, to like living in.

HARD LABOUR introduced you to Vince and his family, with heaps of background into what got him to Warrnambool and the way his life is panning out, but there's more than enough in this second novel to get you up to speed quickly. It's a pretty good balancing job as the focus of this is very much on Vince's family, the suicide of his brother, his sister-in-law's pursuit of the reason for that death, and the fall out that comes as a result of realising that his brother was the victim of a paedophile priest at the time that they were both boarders at St Bernard's College in Ballarat.

Anybody who knows about the scourge of the catholic church in Ballarat will quickly figure out where the real life St Bernard's College, just as they will realise that many of the events that Vince's family are experiencing have been endured by way too many families in Ballarat and elsewhere throughout Australia. This novel is a combination of Vince's professional battles, with another high-risk delivery threatening his entire medical career, and the more personal. The guilt he feels about his brother's death is compounded by the guilt he feels over his long-distance relationship with his twin daughters - growing into teenagers rapidly, and his regret over the failure of his marriage. He's not so regretful when it comes to winding up former colleagues and his wife's new boyfriend however, and he can't seem to keep his sarcastic mouth to himself, even when keeping a low profile and not annoying influential people would be the sensible approach.

Then there's his friendship with DC Elena Genovesi that isn't romantic, but could be; is mutually supportive, but might not be if he doesn't keep his nose out of police business; and his next door neighbours - who feed him, help him care for his dog and have befriended him even as he clod-hops his way through everybody's lives including his own.

This is regional / rural crime in that the setting is mainly large country-town Warrnambool, because Vince's family are from the Wimmera and they still had connections to the land and the farm, and because the abuse was particularly prevalent in Country Victoria. The series does give you a bit of a glimpse into life in those larger country-towns that are starting to build in Victoria. There's urban elements there - cafes / restaurants / food delivery services, but there's still a rural"ish" feeling - the footy club / the way that people know each other more closely, and the ties of so many people "back to the farm / family" out in the rural areas.

Vince is an interesting character, and these two novels are an interesting series. Sure they are a bit on the frenetic side at times, and they can also wander off into the internal monologue space a bit. YOU'RE NEVER THE SAME tackles a difficult, very topical subject with some care and illumination. It's not often that you get a glimpse into the perspective of the family left behind, victims in their own right of the appalling behaviour of the abusers and the enablers within that awful church. It does it with humanity and failure, passion and belief, with the characteristic slightly light, but never disrespectful touch that seems to be at the core of this series. 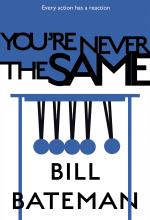 Vince is still in exile down on Victoria’s southwest coast, serving out his time before returning to his wife and family and reclaiming his status as a big shot metro OBY/GYN. Well, that’s the plan. If he keeps out of trouble.

But trouble has a way of finding Vince. When his only brother commits suicide on the family farm, it looks like drought and isolation have claimed another victim. Or was there another reason? Then there is a local murder and Vince wonders if the two deaths are connected. Driven by guilt about neglecting his brother, he decides he must find out. The quest leads him to the gates of his alma mater, St Bernard’s College in Ballarat.

Meanwhile, back in the labour ward, Vince encounters another near catastrophe and saves the day with a risky delivery—a high wire act with no safety net—and his career is threatened. Again.