You can't help thinking that this is an interesting idea for a book, the story of one of the most famous real-life spies, told from the point of view of Philby's own life. Now the book and it's publicity material is quite tricky about the background of this book. Whilst there's nothing there to indicate whether or not this is a true story or fictional, it's written in a way that implies that the whole thing is the true story of Kim Philby's early years.

YOUNG PHILBY is however, a novel. It expands on what is known about Philby's life after Cambridge University (where he, Donald Maclean, Guy Burgess and Anthony Blunt formed the truth-life Cambridge Spy Ring), but embroiders the facts with the fictional imaginings of the author, Littell, about how he came to learn his spycraft, and the people and influences that guided his activities. Told from a variety of different viewpoints, YOUNG PHILBY takes the reader back to the time at which Philby is recruited, time that he spends with his handlers, lovers and friends, the time in which he learns and masters the art of surviving as a double agent.

You'd think, because of the inherent danger in the life that Philby was setting up for himself, this should be an extremely compelling story, even allowing for the fictional excursion, but for some reason it just didn't come alive for this reader. Part of the problem seemed to be that the story is told from a series of different viewpoints, which I rapidly found almost impossible to tell apart. Men, women, participants, observers, there's was a constant tone throughout the book that didn't clearly distinguish each of the various players. The other problem was that everyone seemed cynical, bored, frequently arch and whilst that could have been trying to create some sort of overall feeling of insouciance, what it ended up doing was make everyone seem rather bored. Which kind of made this reader rather bored with the lot of them.

Because tone is such a very personal thing, and because there are also readers who don't mind the fictional playing a bit loose and fast with real life history, YOUNG PHILBY is a novel that could really work for other readers. Ones that like the cynicism, that can find depth in the people, that are intrigued by the imaginings of what could have happened in Philby's life, and who rather enjoy the peek behind a fictional curtain on real-life espionage. 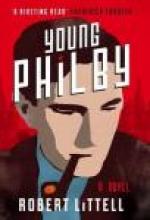 When Kim Philby fled to Moscow in 1963, he became the most notorious double agent in the history of espionage. Recruited into His Majesty's Secret Intelligence Service at the beginning of World War II, he rose rapidly in the ranks to become the chief liaison officer with the CIA in Washington after the war. The exposure of other members of the group of British double agents known as the Cambridge Five led to the revelation that Philby had begun spying for the Soviet Union years before he joined the British intelligence service. He eventually fled to Moscow one jump ahead of British agents who had come to arrest him, and spent the last twenty-five years of his life in Russia.

In "Young Philby," Robert Littell recounts the little-known story of the spy's early years. Through the words of Philby's friends and lovers, as well as his Soviet and English handlers, we follow the evolution of a mysteriously beguiling man who kept his masters on both sides of the Iron Curtain guessing about his ultimate loyalties. As each layer of ambiguity is exposed, questions surface: What made this infamous double (or should that be "triple"?) agent tick? And, in the end, who was the real Kim Philby?