If you had asked me what I was expecting before I picked up this auto-biography, I doubt I could have told you.  Maybe a bit about what it was like, really like, to be within the inner circle of the Beatles.  A feeling for the how it was in the beautiful, swinging, mad, crazy 60s "it" crowds.  Perhaps some sex, drugs and rock and roll, maybe even a little gossip.  Written by the muse of two of the most famous musicians around I was hoping to see what it was about this woman that influenced / engendered that reaction in men who - well let's be frank - could probably have had any woman they wanted.

Pattie Boyd spent part of her childhood in Kenya, but even for the child of divorced parents, the raising of Pattie and her siblings seems to have been a slightly erratic undertaking, although she does seem to be close to her mother in later life.  She left home, fell into modelling, met George Harrison during the filming of "A Hard Day's Night" and life from there took off as she and George found an instant attraction.  Later, as married life with George turned sour, Eric Clapton told George one night "I have to tell you, man, that I’m in love with your wife".  Later, married to Clapton, things again turned sour as he struggled with a drinking problem and became more and more distant.

At points in this book you can see glimpses of what it must have been like to live a life so publicly scrutinised and followed.  You can get some sense of the way it must have been to go from a life of nothing to the privilege of money.  You can see some of the dissatisfaction that can arise from fame, notoriety, pressure and the sheer excess of money.  But to me, a lot of this seemed to be just that - glimpses.  As a result of that, I was a little disappointed.  This is a woman who was as close to that particular, exciting, period of music and social history and change as anybody could have been (without being one of the musicians herself), yet the story that she wrote seemed a little flat, disconnected and jumbled.  Maybe Penny Junor, dual writing credit on the book, should have had a firmer hand in directing the narrative, but Boyd's own voice is a little muddy, toneless, perhaps extremely cautious?  There is a lot of name dropping however, and I'd imagine that anybody who is a passionate fan of the Beatles will appreciate whatever glimpses they can get into the inner-world of the band.  At the end of the book could I see why Pattie Boyd became that famous muse?  I'm not sure. 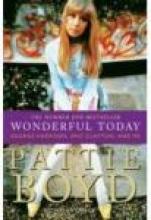 Pattie Boyd was at the heart of the Sixties revolution; the most famous muse in the history of rock 'n roll.  She married both George Harrison and Eric Clapton - two of the most addictive, promiscuous musical geniuses of the twentieth century - and inspired Harrison's Something and Clapton's Layla.  An international model who was welcomed into the Beatles' inner circle, hers was a life of passion and loss, fuelled by drink and drugs.