Re-reading any of Pat Flower's excellent books is always a very bittersweet experience.  Reading SHADOW SHOW even more so, as my edition was published after Flower died, from the effects of pentobarbitone poisoning, taken intentionally, in September 1977.

Patricia Mary Bryson Flower was born in February 1914 in Kent, England.  Her family came to New South Wales in 1928, where she lived firstly at Kyogle and then in Sydney.  In the 1940's, whilst working as a secretary for the New Theatre League, she wrote sketches and plays in her spare time.

Whilst she was back in England with her second husband, between 1950 and 1955, Flower began to write crime novels, the first of which was published in 1958 - Wax Flowers for Gloria.  She went onto publish at least one crime novel every two years until 1975, including Goodbye Sweet William in 1959, featuring her Australian "Maigret" character - Inspector Swinton, and then onto a number of excellent psychological thrillers including Cobweb (1972), Slyboots (1974) and Crisscross (1976).

After returning to Sydney, Flower wrote film and tv scripts, whilst she also worked as an advertising copywriter until she began to write full time in 1963.
For more of her personal story - check out the Biography of Pat Flower at The Australian Dictionary of Biography.(link is external)

So getting, finally to Shadow Show.  You need to read this book with an eye to the period in which it was published.  Before mobile phones, computers, and an enormous amount of technology and fast communications, this book might read as a little "mannered" in tone perhaps.  But the fundamental elements of a psychological thriller, the slow unmasking of the truth, the increasing tension being felt by central characters, the all too human reactions to both of those elements is done so incredibly well in Flower's thrillers, they are still fantastic books to read - even with the passage of time.

It is never a chore to go back to Pat Flower's books.  It's always sad to realise there are so few.  Each and every one of my copies are highly treasured, and every time I return, I kick myself for not doing so more often. 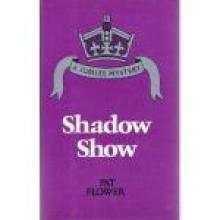 Strange coincidences entangle Richard Ross in a crime he did not commit and draw him deeper and deeper into unethical international dealings he had desperately tried to avoid.  Is Athol Cosgrove, Richard's shady business associate, manipulating the events that make Richard's life miserable?  And if not, who is?  These questions, and others, become more urgent as rising tension leads to violence and murder.