RUMPOLE AND THE REIGN OF TERROR - John Mortimer

Hilda is writing her memoir, so it's probably just as well that Rumpole doesn't know what she is doing locked away in the boxroom for hours on end.  But Rumpole is very busy telling his own story of how he nearly lost his livelihood (aka the Timson family clan), and found himself involved in the new world of Terrorism trials.

Despite being extremely concerned about the wherewithal to support both the ongoing requirement for furniture police, Fairy Liquid, scrubbing brushes and Vim alongside his own meagre indulgences in Chateau Thames, Rumpole's sense of justice is outraged by the plight of his client.  Dr Mahmood Khan (estranged son-in-law of one of the Timson's) is being held on terrorism charges without the benefit of the details of the crimes with which he has been charged.  Rumpole is not at all best pleased by these new terrorism laws, particularly the secrecy aspects and whilst he battles the impossible situation, he is also cunning enough to find a loophole and get his client a proper public trial.

Whilst RUMPOLE AND THE REIGN OF TERROR is wonderfully entertaining, and extremely amusing, it also touches on some important Justice issues.  Rumpole is fighting the good fight against unfair laws and unreasonable judges.  He's also quite prepared to take on anyone in the prosecution - representation or witnesses.  For all his bumbling and slightly scruffy regalia, Rumpole has a fine legal mind and he upholds the British Justice System that believes that everyone is entitled to a robust defence - regardless of whether their defending barrister believes in their innocence or guilt.

The book is an interesting little outing with Rumpole.  Written in a semi-autobiographical style, the story of Rumpole's trial is interspersed with snippets of Hilda's memoir.  This gives the book a rather unexpected sort of feel, probably because in the past most of what you hear from Hilda is short, sharp and frequently quite despairing of Rumpole's latest activities.  There's still quite a bit of that in Hilda's reminiscences, but there's also reflections on married life, friends and quite oddly, her friendship with (well sort of courtship by) Mr Justice Leonard Bullingham (aka Mad Bull).

Giving Hilda a voice adds a little to the bulk of the book, but doesn't really distract from Rumpole in all his glory.  Full of mumblings, mutterings, and clever contortions, this is Rumple at his most entertaining, telling a tale which actually has some important points to make. 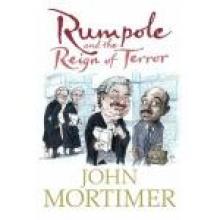 Justice isn't blind - it's just a little short sighted and weak around the knees ...

His wig may be yellowing and his gown might be in tatters, but Rumpole will not give up the good fight - now while there's injustice to battle.

When a distressed Tiffany Timson (of the infamous South London clan of petty criminals) tearfully explains that her husband Dr Khan has been arrested on suspicion of terrorism, Rumpole knows that to take on this case will mean not just defending one man, but squaring up to the very notion of modern British justice.

With She Who Must be Obeyed mysteriously shutting herself away and fellow-members of his chambers just plain scared, it seems that Rumpole must stand alone against the Establishment.  But that is precisely the position any defence barrister worth his salt relishes most...