The first book in the Jack Emery series (THE FOUNDATION) looked at the potential for corruption, using a major media organisation to further somebody's political ambitions by coercion. This time around, STATE OF EMERGENCY looks at another interesting scenario: the use of a major government arm to further a personal and political agenda. It's a sobering, realistic scenario that plays out as an inexperienced president panics in the face of a series of terrorist attacks on American soil.

Handing over control to the calm, competent and seemingly unassuming head Administrator of FEMA seems like a reasonable solution in times of extreme threat, but somewhere in the Presidential advisor ranks you would have thought somebody would be whispering a version of my favourite mantra when things seem to be getting increasingly pear-shaped: Trust No-One. Believe No-One. If in doubt, see point One.

Needless to say one of the first steps of the new Emergency Management Regime is to start to remove citizens rights. Curfews, restrictions on sales of alcohol, control of the media - the sorts of things that you'd expect when a totalitarian regime rolls out. The State Guard is called into protect key sites and maintain law and order. Frequently tasked way above their capabilities they struggle to manage the fallout from rationing, the prison camps into which opponents are whisked away, and the riots that ensue. The whole country is starting to fall apart. Officials in FEMA are starting to wonder. And things aren't rosy in the ranks of the terrorist cells as well.

As with all thrillers of this nature the threat is big, the resistance is small, and... the world needs a hero. In STATE OF EMERGENCY Jack Emery is that hero, but he's supported by other journalists, every-day citizens, and importantly, a FEMA official who puts her own life on the line to expose the level of madness that's taken control of the country. Of course you're going to have to accept some of the old energiser bunny aspects of hero's of this nature - doesn't matter how tight the squeeze, or how bad the situation, they are going to find a way out (you expect), but exactly how isn't always apparent.

As with the earlier novel (and novella) in this series, the action is high-octane. There's leaping and bounding about at a rapid pace - on the part of the goodies and the baddies. The baddies are reasonably nuanced though, avoiding the madder than mad on a mad person's day out cliché. Of course Hall is a threat, and absolutely single-minded in his pursuit of his own agenda, but some of his motivations almost make sense, and there's no questioning the level of commitment that he's bringing to his task.

To be a good thriller, any book needs to allow the reader to park their disbelief and any niggling concerns about a few unlikely procedural questions, and cheer for the hero. It doesn't hurt when you can sort of see what the baddie is getting at either. STATE OF EMERGENCY is such a book, and another fun, escapist outing with Jack Emery in charge of saving the day, ably assisted, for a change, by some women with brains, bravery and chutzpah to spare. 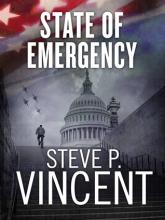