Review - NO ONE KNOWS YOU'RE HERE, Rachel Howzell

It's hard not to admire the bravery of an author that opts to write a crime novel in a strong, first person voice. A lot of a reader's enjoyment of that novel may then be hanging on their like, or dislike, of the central character. In the case of crime reporter Syeeda McKay we have a very upfront woman, despite her recent breast cancer surgery; her on again, off again relationship with Detective Adam Sherwood; and odd friendships and encounters with old school friends.

Part of what works about McKay's voice is a hint of self-doubt, and humour. Which is particularly useful as she does seem to be prone to jumping off the deep end, straight into the mouths of sharks when it comes to her investigative technique. I suspect if her voice, and her personality is at all jarring to any reader, the number of times she seems to close her eyes, whack on the most inappropriate shoes (so to speak) and launch herself into the shark enclosure will drive you utterly bats. Somehow, luckily, for this reader, her voice worked, and whilst there were times when a good slap around the ears seemed warranted, at the same time it made sense that she'd be leading the charge of the well-intentioned but mildly daft.

Whilst elements of the plot revolve around another one of those "mad / bad / lunatic serial killer / targeting women / probably because he hates his mum or his aunt made him eat his sprouts or whatever" scenarios, NO ONE KNOWS YOU'RE HERE does manage to bring some new angles to that well raked patch. There's enough there to make you wonder whether it is the serial killer striking always, or whether there's a copycat, or even an opportunistic villain out there. And whilst we do have some concentration on the killer, there's nothing voyeuristic or uncomfortably intense about it. As McKay is the central figure, the action always comes back to her viewpoint, and she does a particularly good line in the poking a hornet's nest style of investigation, all the while dealing with her own personal issues in a rather matter-of-fact and refreshing manner. Although you do wonder what she did in a previous life as everything seems to happen to Syeeda McKay. Which leads us onto what appears to be the major downside of this book. The ending is just too unbelievable and yet somehow, sadly, very predictable.

But, even allowing for the odd wobble, if you'd like to read something which has a really strong, unique central female character then NO ONE KNOWS YOU'RE HERE has more than enough good to balance it all out. Certainly left me hoping that McKay makes another appearance. 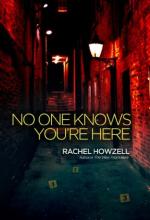 Three weeks out of cancer surgery, crime reporter Syeeda McKay is in the pursuit of Los Angeles’s most active serial killer. Over the last twenty years, the Phantom Slayer has hunted African-American prostitutes working in one of the worst parts of South Los Angeles, killing eight victims in the alleys off Western Avenue, and then disappearing into the shadows. But Syeeda doesn’t know that the killer has turned his sights on her.

Detective Adam Sherwood, a hotshot investigator with the Robbery-Homicide Division of the LAPD, has been handed the Phantom Slayer cases, and together, he and Syeeda must figure out who is doing the killing . . . before Syeeda becomes his next victim.