The third book in the Jack Emery series of thrillers from Melbourne based author Steve P. Vincent, NATIONS DIVIDED picks up the ongoing storyline of a special agent that's happier than he's been in a long time. Because nobody has tried to shoot him or blow him up for years, and despite his reservations, he's rather liking his job as Special Advisor to the President of the United States.

The President's term is coming towards an end, and with elections looming, the administration is keen for a big win on the board, and what bigger achievement than a peace accord between the Palestinians and the Israelis. Needless to say their efforts are thwarted from deep within Israeli territory when a shadowing and ruthless group of hard-liners invoke the Samson Option. A long time in the dark, secret plan that will stop any attempts at a peace agreement regardless of the costs.

As is usual in this series, we're talking big big threat and one man to save the world stuff. In order to keep the credibility of that sort of scenario going then the pace is kept at an extreme level, and the personal threat as immediate as the potential of worldwide threat. The shadowy nature of the plotters at the heart of the Samson Option are cleverly constructed and there's not a lot of time to take a breath and think as everything belts towards the finale of the novel at hell for leather pace.

If you've been fortunate enough to read the earlier novels (and a novella) then Emery's ability to withstand a heap of physical punishment and more than a bit of emotional battering will be well known to you. If you haven't then what you have here is the classic thriller hero. At the same time you've got an interesting mix of the unbelievable, over the top, cue the "Hidden Camera" moment type of plot that keeps the threats coming to everyone from all directions. Whilst it could be that in this outing the plot is slightly less on the believable side than in the earlier novels, you're probably not going to notice that until the final page is completed and a little breathlessness resolved.

The thing I like about this series in particular is that it is big scenario, American style thrillers with a central Australian character who is just a bit different from the rest of them. He remains quintessentially Australian in attitude, and approach. If you've not read the earlier books then there's no reason why you couldn't start with NATIONS DIVIDED, but you'll then probably want to go back to the start anyway. 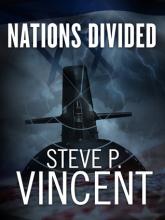