A thriller set in what's becoming the familiar territory of Iraq and Afghanistan, Pakistan's status as a nuclear nation plays into the action in KILL ZONE.

The idea of nuclear devices the size of briefcases going missing isn't a new one in thriller world, and to be frank I've no idea if it's realistic or not, but it certainly feels that way. The idea that the powers that be are 50% of the problem for the poor on the ground investigator is also not a new idea, but the idea that a deputy director of the CIA would be playing political games in a time of heightened terror alerts is certainly a new spin on things.

But really, the ultimate idea of a thriller of this type is that reality or not probably shouldn't come into it - it's all a matter of whether the reader is swept up into the scenario and pulled into the story. With all the black ops, double crossing, treason, nefarious goings on, special forces and a hefty dose of seemingly invincible protagonist, it definitely works in KILL ZONE. But the point that really works is the idea that the secret services are as fond of secret ops against each as they are against any "enemy".

Character development in KILL ZONE is also not bad given it's an action based thriller, and the pace is really good. KILL ZONE has action aplenty and enough tension and protagonist jeopardy to keep any fan of thrillers on the edge of their seat. 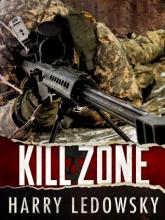