The first of the Peter Clancy books from T.W. Lawless, HOMECOUNTRY takes Clancy to exactly that - home to the town where he grew up, in outback Queensland to bury his mother. With his credo of never looking back this is the first time he's returned to Clarke's Flat since he left, so for the first time he's forced to confront many of the reasons why he left in the first place. And it's not a comfortable outlook.

There's much that's happened in his home town to him, to his family and to friends and people who are still in town. There's questions around his own father's death, about this mother's actions after selling the farm and moving to town, and in particular, in what happened when he was a teenager, to his then girlfriend. None of this paints anybody much in a particularly good light. Especially Clancy who, perhaps because of that never looking back thing, has left some chaos in his wake and seems particularly put out that he's going to have to sort some stuff out. Now.

Having read the second book in the series first, Clancy does become a more engaging character than he might be for anyone coming to HOMECOUNTRY first up. Here he could come across as too blasé about something that caused so much damage. Although he does eventually twig and try to make reparations. He also does approach a lot of things with a hefty dose of cynicism (as you'd fully expect from anybody who could work for The Truth). And the man has exactly the taste in music you'd expect from somebody born in his era - Hendix, Led Zeppelin, Deep Purple fan and all.

Dryly humorous throughout, with occasional bursts of flat out funny, Clancy is not all bad, and his mother wasn't completely wrong to do what she did, and the past is sometimes a tricky place to navigate. As a debut novel, HOMECOUNTRY is well written, with strong storytelling, particularly when you consider that the central character is just a bit ambiguous. If I'd read this as a debut there's certainly enough to make me look for the rest of the series. (The second book is THORNYDEVILS, the third BLURLINES).

Worth a look and not just for those of us who grew up in the bush, remember those bands, remember The Truth, and have a feel for what it's like to be from small town 1980's and be desperate to be anywhere else. 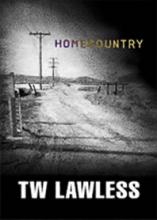