Housekeeping first - FIREPLAY (Jack Emery) 0.5 is the novella based prequel to THE FOUNDATION, but released after the first full-length novel came out. The action in FIREPLAY clears up some of the backstory in THE FOUNDATION, but it doesn't matter a jot what order you read them in.

Having started with THE FOUNDATION, FIREPLAY was much appreciated. Nicely balanced between filling in some of the back story of protagonist Jack Emery, and telling a tale in it's own right, again we've got a tale that could come direct from real-life.

Embedded in Afghanistan reporting on the activities of a Marine Regiment, Emery stumbles on a secret Marine Camp deep in the Afghan countryside where there is something sinister not that far under the surface. The amount of action, detail and plot that's served up turns this novella into a page-turner, and a sobering political / come action thriller.

Along the way there's enough in FIREPLAY to also give new readers of Vincent's work a feel for their new protagonist Jack Emery. If you're new to these books then it wouldn't hurt to read them in order - this novella first, then THE FOUNDATION, leading us all to the latest outing STATE OF EMERGENCY. If you've read THE FOUNDATION first (as did this reader) then FIREPLAY works second equally as well.

This is definitely a series for fans of political action thrillers regardless of what order you read them in. 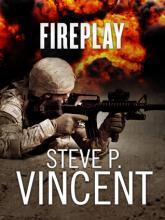 A chance lightning strike. A reporter in the right place. A scandal that will rock America.

Journalist Jack Emery has seen it all. Embedded for the New York Standard with the 8th Marine Regiment in the heart of Afghanistan, he has covered everything from firefights to the opening of new schools. But nothing has prepared Jack for the story that is about to explode right in front of him.

When a convoy Jack is riding in is attacked by a lone zealot, Jack asks a question that puts him on the path of a sensational story. But he'll soon learn that his struggles to find the hook are nothing compared to the dangers of getting it out.