Don't ask me what's going on. NEFARIOUS DOINGS, the first book in the Nell Forrest series released in digital format by Momentum Books, is the sort of accidental female PI thing that I seem to have been reading lately. The only reason I can come up with is that the ones I have stuck with have been very good.

Perhaps it's because Nell might be a bit put upon (honestly why can't anybody else in that household throw together regular meals...) but she's not daft. She might be a bit ditzy but she's not stupid, and even though she's more of a stumbler upon the truth than the world's best investigator, there's a lot to like about this book, and this cast of characters.

Perhaps it's because it is a realistic cast of characters, particularly when you put them all in a smallish country town. Even the establishment of the town of Majic is a nice little cul-de-sac. The setting isn't really the point however, and the concentration on this book is very much on the cast of characters. Nell, a bunch of daughters, her sister and mother, this is a female dominated world, albeit with the occasional bloke thrown in for a bit of colour. Mercifully this is a cast of females who aren't all saccharine sweet with each other, or backstabbing every step of the way. Sure there's the occasional bit of snipping but that's the very least you'd expect, and there is .. well let's call it a heightened sense of theatricality about much the family and their cohorts. Never quite tipping over into annoying, the chaos made sense, providing a general feeling of an activity and plot whirlwind, that led to exactly the sort of resolution you'd expect. Even the slight dose of fem-jep made sense given the "prod and poke until somebody loses their cool" style of investigation.

No surprises that this is the sort of series that's going to appeal to cozy style mystery readers who are looking for something that's funny, and as light-hearted as you can get when it comes to crime fiction. Fans of this style of book won't be disappointed by this local offering. 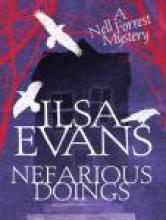 Welcome to the sleepy town of Majic, where neighbourhood watch is a killer …

For Nell Forrest, life in the little town of Majic is not going smoothly. One of her five daughters has just swapped university for fruit-picking, another is about to hit puberty, while a third keeps leaving aggrieved messages on the answering machine. On top of all this, her mother is infuriating and it's only been a matter of months since Nell lost her husband of twenty-five years. It's no surprise, then, that she is even struggling to write her weekly column.

But the floodgates of inspiration are about to swing open, almost knocking her out in the process. Murder and mayhem, arson and adultery, dungeons, death threats and disappearances are just around the corner. Despite Nell's abysmal aptitude for investigative work, she manages to shine the light on the local Richard III Society and that's when things really start to heat up. Throw in some suspicious widows, nosy neighbours, a canine witness, plus a detective who is getting a little closer than he should, and it's clear that nefarious doings are well and truly afoot.