Being a bit of a sucker for a strong sense of place, and culture I was intrigued by the Makana series, and lucky enough to get the second book - DOGSTAR RISING for review. But this seemed to me to be a series that should begin at the very beginning, so I shouted myself the first book, THE GOLDEN SCALES.

In terms of sense of place, and the society in which the book is set, it was extremely well done. The ancient city of Cairo is not just the backdrop for the story, it inhabits the action. There's a physical feeling of the souks, and alleys, the dark corners in which the unknown lurks. Part fascinating and compelling, part frightening and threatening, THE GOLDEN SCALES paints Cairo as a place in which people could disappear. Some willingly, some not. It also paints Cairo as a place that provides some refuge for Makana, a former Sudanese policeman, who lives physically and emotionally on the outskirts of the society to which he fled when things in his homeland got very dangerous.

That idea of Makana, a refugee from violence, ex-policeman now living and working on the fringes, as the person that one of the most powerful, wealthy and dodgy men in Cairo would turn to when a player from his team goes missing sort of makes sense, just as the fact that the missing player is treated as a son of Saad Hanafi, gangster, developer, father, and man with a very chequered past, means that the choice of investigator doesn't make sense. There's obviously a reason buried deep in the mire of those who work for and against Hanafi, and somewhere in the middle of a corrupt and compromised political and policing system. In the middle of all of this an Englishwoman returns to Cairo, still searching for the daughter that has been missing now for many years.

Needless to say this is a complex plot, with Makana at the centre of the swirling current day events, dealing with his own past and an overriding sense of loss and guilt that he battles on a daily basis. His personal story is slowly revealed as is the truth about a missing Football Player who is more than he seems, an ageing Gangster who is both more and less than he seems, a daughter with secrets, and close colleagues of all who aren't as straightforward as they seem.

THE GOLDEN SCALES is a beautiful balancing act. The bleakness of the place, the society, the state of the world in which Makana operates is matched sometimes by the bleakness of his mood, and lightened frequently by a dry, acerbic observational wit which is quiet, subdued and often cutting. A thriller set in an Islamic world, the story touches on the volatility of power, religion, influence and corruption with restraint, intelligence and expertise.

What really works in THE GOLDEN SCALES is the balance between plot, character, events and place. The plot is persuasive and believable, incorporating the reality of current day scenarios where conflicts cause personal disruption and refugees who must find a way in a new world, whilst dealing with the demons from their past. The characters are compelling, human, brave, damaged, thoughtful, introspective, forceful, good, bad and the whole thing. One of the particular aspects of the characterisations that I appreciated was the idea that everyone, both the good and the bad, was nuanced. Everyone has their good and bad sides, and you could see the reasons why they took the path that they chose. The events and the place are inextricably linked, although the sense of place was all pervading. Needless to say, THE GOLDEN SCALES bodes very well for anyone who wants their thriller / crime fiction layered, thoughtful, instructive and clever, whilst not letting up on the thrills and chills. 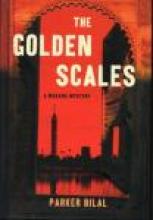 The ancient city of Cairo is a feverish tangle of the old and the new, of the super rich and the desperately poor, with inequality and corruption everywhere. It's a place where grudges and long-buried secrets can fester, and where people can disappear in the blink of an eye.

Makana, a former Sudanese police inspector forced to flee to Cairo, is now struggling to make ends meet as a private detective. In need of money, he takes a case from the notoriously corrupt mogul Saad Hanafi, owner of a Cairo soccer team, whose star player, Adil Romario, has gone missing. Soon, Makana is caught up in a mystery that takes him into the treacherous underbelly of his adopted city, encountering Muslim extremists, Russian gangsters, vengeful women, and a desperate mother hunting for her missing daughter-a trail that leads him back into his own story, stirring up painful personal memories and bringing him face-to-face with an old enemy from his past …

Published on the anniversary of the revolution in Egypt, The Golden Scales is an elegantly written, thrilling story set in a city of upheaval, chaos, and corruption.