I think it would be fair to say that this is the sort of thriller that you need to park your credibility around the back of a very very big wall before you start reading.  Here we have, in the words of the front cover, a secret experiment, a lethal virus, a deadly plan.

In the process of executing these elements we have a positively astounding body count.  A body count that will just make you wonder if there is going to be anybody left in Queensland in particular.  There's an extreme level of violence, there's an overt tendency for lots of people to do lots of things, loudly, in a hell of a hurry, with a lot of shooting, and shouting and yelling and rushing around.

After all, EDEN PRIME is an action thriller and it certainly has action aplenty.  On the credibility front, I'm never convinced by a "great big threat of annihilation" from a deadly virus in the hands of a mad bad and absolutely manic evil single person.  But fortunately I did manage to find a pretty hefty wall of my own, and once over the idea that the body count must have been a sobering experience in the hotter, tropical climes of Australia, you can settle in for a crazy ride with EDEN PRIME.

I don't think you could ever accuse Semple of underplaying his hand in either of these books - and they are a tad overlong, as well as a mite confusing at times as there are so many names that pop up, with a little background, only to be killed and along comes the next person.

But this is an Action Thriller and it definitely has a red hot go at delivering what it promises.  This could be just the ticket if you're a fan of that sort of big threat, madder than mad, weird as all get out, the world is going to hell in a handbasket if it were not for just our hero, style action thriller. 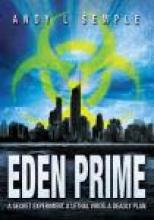 In the increasingly turbulent atmosphere of international environmentalism, the once peaceful grass roots climate change group – The Eden Movement - has been covertly taken over by the mysterious figure known only to his legion of radical followers as Prime.

At the same time, an increasing number of high ranking Australian military officials and senior ASIO intelligence analysts are contracting an untraceable and fast-acting virus with a 100 percent fatality rate.

With few clues and precious little time, Sentinel operative Jonas ‘Witch Doctor’ Blackthorne must unravel this mysterious plot and locate the shadowy figure at the centre of the chaos.

For unbeknownst to the world at large, The Eden Movement is on the very tip of the iceberg in a deadly plan that will risk the lives of billions and forever alter the future of the entire human race.