THE CURSE OF THE GOLDEN YO-YO - Robin Bowles

Well you just knew it had to happen - an Australian crime fiction book complete with recipes.  And a VW named Henry, a Rottweiler named Kissiface, a cop named Riley, a purveyor of fine foods named Romeo, a canary named Groucho and a PI named Cornelia.  Cornelia starts off life as chief cook and unpaid scivy for her ex-Military father.  Good education aside, Cornelia longs for a more exciting life, so working as a PI Operative in the firm started by the son of the Italian family next door sounds much more interesting than teaching.  Unfortunately the job seems to revolve around simple Insurance investigations and Cornelia's easily bored.  A missing person case livens up life considerably.  Angela had quite the life - very nice flat, lots of very nice possessions, nice clothes and she seems to have just vanished.  Investigating what happened to her gets Cornelia into lots of hot water with the cops, the Mafia and her boss; as well as a very nice flat, some very nice possessions, a couple of very nice potential boyfriends and a golden yo-yo.

THE CURSE OF THE GOLDEN YO-YO is the first fictional crime book for well known local true crime author Robin Bowles and it's based on the short story that the author wrote (and won) for the Sisters in Crime Scarlet Stiletto Award for Best Private Investigator story in 2000.  It is very light-hearted, downright silly in some places, and just pure entertainment (how could anything with a Rottweiler called Kissiface in it be anything else!).  This book will undoubtedly remind readers of the Janet Evanovich Stephanie Plum series or the Liz Evans Grace Smith novels as it sort of sits somewhere in the vicinity of both of those styles.  Readers should perhaps be warned though, THE CURSE OF THE GOLDEN YO-YO has one of those hanging endings - the sort that either intrigue or annoy depending upon your personal preference.

The next book - The Mystery of the Missing Masterpiece, co-incidentally, was released in Melbourne this week so I will definitely be keeping an eye out for it. 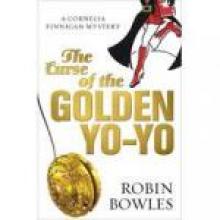 Meet Cornelia Finnigan, the loudest, loveliest and luckiest PI around.

With a swagger, a smile and a slash of lipstick she takes on the mystery of a torched Ferrari, investigates the case of the poisoned Pekinese puppies and stumbles into the world of missing persons, drug deals gone wrong, laundered money and murder.

And then there's Elvis, the tennis pro and a solid gold yo-yo to die for...