In October 2002, the US districts of Maryland, Colombia and Virginia were under attack.  Driveby sniper shootings were occurring in all sorts of locations - schools, petrol stations, convenience stores, front yards. Nowhere was safe. The FBI and state police scrambled all available to deal with the random attacks and initial thoughts as to who the sniper might be were way, way off. Call me God is an audio documentary of the DC sniper investigations as put together by two investigators who were there, brothers FBI Special Agent Tim Clemente and FBI Profiler Jim Clemente.

Perhaps like me, you recall this case but not being American, might be a bit sketchy on the details. What stood out back then was the fact that the sniper was found to be two shooters working together. This flew against all the known suppositions of the time that serial killers operated alone.  Also, that the garden variety American US serial killer was more likely to be a white male.

If you have someone in your life who is being stubbornly resistant to jumping on the audio entertainment bandwagon, this long form podcast/audio documentary might just pique their interest.  Call me God is a gripping collection of transcripts, emergency calls, witness recollections and survivor testimonies that inform in a way that no two hour screen documentary ever could.

Narrated with assurance by ex FBI Agent Maureen O’Connell, Call me God is one of the most tense listening experiences you can have with your earpods in. As events unfold, the Clementes relay what their own professional assessments were at the time, and include personal anecdotes of what that meant for people who lived in the area. One example of this was Tim Clemente’s wife and kids who pulled out of a service station minutes before another driver was shot behind them.

True crime fans know the work of former FBI profiler and former New York city prosecutor Jim Clemente from the podcast ‘Real Crime Profile’, or perhaps as a writer/producer with the NBC crime drama ‘Criminal Minds’.  Jim Clemente has impeccable credentials for this kind of audio documentary, and his own past professional involvement with the DC snipers case adds a whole new perceptive level to Call me God.

Looking back through a more educated lens now in 2020, with the knowledge that many mass shootings have domestic abuse as the first or intended crime - surprise surprise, so did the shootings of 2002.  Call me God collates from the first shooting victim right through to families witnessing the state sanctioned execution of the adult shooter. Giving voice to the victims, each shooting is life lost and possibilities severed. The families are given a chance to tell listeners what was taken from them and hearing this in their own voices is incredibly moving.

Call me God: The Untold Story of the DC Sniper Investigation is a 7 hour audio book/documentary available via Audible. (If you do not yet have an Audible account, you will need to sign up as a member to receive this book as a free download). 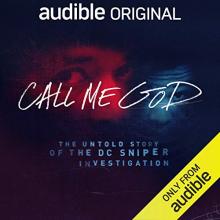 Inside Michael’s craft supply store, cashier Ann Chapman rings up another customer. Then it happens. A loud crack; a gust of wind; the light in register five goes dark.

Over the next 23 days, the entire DC area will be thrust into a reign of terror unprecedented in American history. Sniper attacks targeting and murdering everyday citizens will bring the entire region to its knees, as a nation still reeling from the recent attacks of 9/11 and the anthrax scare, are forced to confront a new type of brutal assault—this time in their own backyard. As law enforcement grapples with the mass carnage and chaos, media’s ravenous 24-hour cycle amplifies the very real fear, while steadily pumping new theories and bad leads onto a paralyzed public desperate for it all to end.

But who can stop it? And exactly how?

Call Me God is the never-before-told story of the fascinating and turbulent investigation that led to the diabolical and elusive killers' capture; one that pitted protocol against instinct, sacred institutions against individual insight. Told firsthand by those few who had the vision and expertise to solve it, and including a fascinating look into the behavioral, ballistic, forensic, and electronic analysis vital to cracking the case, FBI agent brothers Jim Clemente (former FBI behavioral profiler) and Tim Clemente (former FBI counter-terrorism expert) take us through every facet and flaw of a nationwide manhunt that pressure tested nearly every aspect of law enforcement capabilities—and its glaring vulnerabilities.

Anchored by harrowing accounts from victims, intimate conversations with family members of those deceased, as well as candid accounts from those who knew the perpetrators best, relive the haunting events of the DC Sniper attack and piece together a true crime phenomenon that's impact can still be felt today.