THE AFFAIR OF THE BLOODSTAINED EGG COSY - James Anderson

Yes, yes, I know.  What am I doing reading a book like THE AFFAIR OF THE BLOODSTAINED EGG COSY.  In my defence I used to be quite a SPLASHER (4MA speak for somebody who reads a wide range of crime book "styles") although in recent years I will admit I've moved more and more to the dark side.  But every now and then I like a bit of a splash around in the lighter side of the genre, and I do rather like the eccentric side of the classic English country house sub-genre.  Chuck in a slightly batty Lord; an unflappable Lady; a house with secret passages; a poor cousin / secretary / jolly young thing girl; a bit of spying and/or intrigue; an imperious butler; an exotic unknown female and some dashing around in the dark, and well I can be quite happy.  Provided it's all done rather well, and doesn't veer too much into cartoon territory.  Which THE AFFAIR OF THE BLOODSTAINED EGG COSY (henceforth to be known as THE AFFAIR ETC) avoids nicely.

Originally written in 1975, THE AFFAIR ETC has a very authentic 1930's feeling to it.  And just the slightest dash of lunacy about it.  The biggest part of the action takes place on one night, when there's a woman screaming; somebody gets locked in a linen closest; one man goes missing (his dead body shows up the next morning in the lake outside the house); one valuable necklace is stolen; the exotic female goes missing; alarms go off; people rush around; and a lot of stuff goes bump in the night whilst nobody thinks to turn on the lights.  All of which culminates in the arrival of a very self-effacing detective, who seems to think he's been promoted above his abilities, and mostly seems to do his detecting by standing around and waiting for others to stick their feet in it... so to speak.

There's also a bit of business to do with a famous pair of guns; a famous gun collection; and a dirty, bloodstained egg cosy in the lavender bushes.  Now it goes without saying that we're talking a very busy plot here, delivered with just a hint of really good farce.  This is the second book from the Burford Family mysteries (actually the first in the series I believe) that I've read and I've got to say I really like these books.  Light-hearted, enormously batty, good humoured and very entertaining, THE AFFAIR ETC is incredibly complicated.  You'll be doing better than me if you can work out what's going on for most of the time, but I hope, like me, you really not going to care and just enjoy being very entertained. 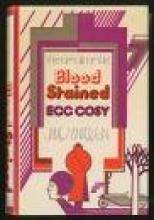 The theft of the diamond necklace and the antique pistols might all be explained, but the body in the lake - that was a puzzle. "Don't expect me to solve anything," Inspector Wilkens announced modestly when he arrived to sort out the unpleasantness. And at a house party that included English aristocracy, foreign agents in disguise, a ravishing baroness, a daring jewel thief, a Texas millionaire, and of course, the imperturbable butler, it was going to take some intricate sleuthing to uncover who killed whom and why.