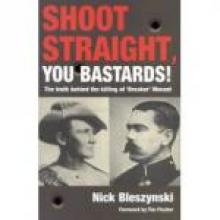 On February 27, 1902, Lieutenant Harry Morant and Lieutenant Peter Hancock were shot by a British military firing squad. Both were serving in the Boer War as Australians under British command. They had been found guilty by court martial of killing Boer prisoners.

While there is no doubt that the Boer War was a dirty one (said to be the first to heavily involve guerilla commando tactics), and that the two had definitely killed the prisoners in question, they both claimed that they were acting under orders from no less a personage than the Commander-in-Chief of colonial forces, Lord Kitchener.

The deaths of these two Australians (as the newly minted nation had become under Federation the previous year) exactly 100 years ago this coming week caused many to question just what Australia was doing giving its sons to fight for a mother country that didn't recognise their prowess, and who, for political reasons, scapegoated them in the worst possible way when afforded the opportunity.

In everyday language, to 'shoot straight' means to tell it like it is. Which is exactly what Nick Belszynski attempts to do in his new work on Breaker Morant, his milieu, and the reasons for his enduring popularity as a cultural icon.