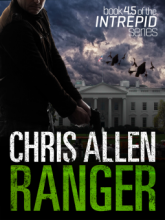 How far will Alex Morgan go to repay the man who saved his life?

Friends are a luxury that agents of INTERPOL's blacks ops division cannot afford, but Alex Morgan wasn't always a spy.

When a former US Army Ranger who saved Morgan's life in Afghanistan reaches out, convinced that Morgan is the only person who can help him, Morgan springs into action.

War hero John Nash has been off the grid for two years. Homeless and forsaken by the government that decorated him for valor, Nash believes he has discovered a trail of treachery and subterfuge that leads straight to the White House. And he might just be right. Hidden in plain sight behind a fortress of spin-doctored hype, the fate of humankind is being traded for votes.

Unable to sanction the mission via INTREPID, Morgan sheds their protection and goes solo. But what chance do they stand, a rogue agent and a homeless veteran, against the might of the US establishment?

This spy novella in the vein of Ian Fleming is perfect for readers of Frederick Forsyth and Clive Cussler.