Andrea Griffith seemed to have it together. She was very  attractive, extremely popular and held a successful career as a journalist. So why did someone want her dead?

The body of a Chinese boy is then found in the early hours. He was murdered before being callously dumped in a causeway. A branded mark on his neck leads to the Gui - a secretive  Chinese organisation.

Somehow the two deaths are linked...

Andrea’s husband Robin, a prominent doctor, is devastated by his wife’s death. Detective John Morton wants to believe that Robin is the prime suspect but there’s just one problem; the murder attempt was aimed at Robin as well.

Morton is led into the sinister Chinese underworld, lured by the beautiful and mysterious Ming Lee. He’s also at loggerheads with his own partner Detective Regina Gardner while she struggles with depression following the death of her close friend Leigh Baxter.

Leigh’s death, Gardner learns, was not so straight forward either. Furthermore Gardner holds a personal secret and it’s not only driving a wedge between her and Morton, her relationship is on the skids and she’s pushed to the limit.

Something has to give in this nightmare.

There’s only one problem with nightmares…you’re seldom in control.

Randall Longmire was born in Adelaide, South Australia in 1973. Elephant Speak (2002), his first novel, introduces Sydney Detectives John Morton and Regina Gardner. It is Randall's first published title. His second title Static, another Morton and Gardner blockbuster, was published in October 2004. His third Morton and Gardner novel, Of Poisoned Minds, is yet to be released. Randall has also written numerous short stories and a childrens book. Now residing in Sydney, Randall lives with his fiance Kelli and their cat Polli. 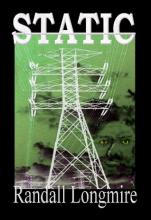