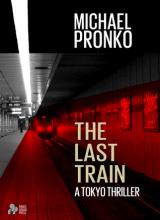 Michael Pronko is an award-winning, Tokyo-based writer of murder, memoir and music. His writings on Tokyo life and his taut character-driven mysteries have won critics’ awards and five-star reviews. Kirkus Reviews called his second novel, The Moving Blade, “An elegant balance of Japanese customs with American-style hard-boiled procedural” and selected it for their Best Books of 2018.