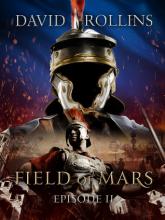 Defeat does not come easily to a soldier.

In the wake of an epic battle with the Parthian empire, Proconsul Crassus's Roman army faces a crisis the likes of which Rome has never known. Centurion Rufinius, one of the few surviving officers, must ensure safe passage for his army and himself.

Facing turncoats within the ranks and temptation from a mysterious beauty promised to the king of a distant empire, Rufinius must fight for his life and for love. In cold-blooded slavers' pits and on bended knee before foreign generals, Rufinius will do anything to renew his men's faith in themselves.

Tested from within and without, Rufinius must learn to lead his men at a time when there is no best option. The first battle that must be fought is one of wills. And on the outcome will hinge the fate of empires.