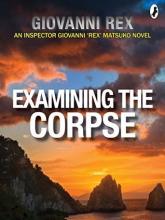 Seventy year-old ex art thief, con man, and now a successful writer Giovanni Rex is completing the second of three novels. Somehow he has managed to stay in Venice, but Venice is a lonely place when all you can think about is the past. After ten years in prison that past is catching up with him, now he has to invent a new one to hide from the present. Capri seemed like a good place to go, a good place to hide, but that was where all his troubles began, especially with the woman who looked just like a Japanese Audrey Hepburn. Before her there was the girl with short hair, before then his brother, then his brother’s wife, then his brother died the same way his parents died, then he made mistakes. Mistakes aren’t mistakes until they’re mistaken for confessions. Inspector Giovanni ‘Rex’ Matsuko from the Milan Sanitation Department has been sent to Capri where a Japanese woman who looks like Audrey Hepburn has gone missing. Perhaps it’s a suicide, perhaps murder, people don’t want a fuss, they’ve sent someone to clean up a mess. Inspector Matsuko isn’t an inspector of anything: even his superiors think he’s a joke. Matsuko is having trouble remembering things, someone tried to kill him, he has the scars as a daily reminder, but he’s not living in the past, the past is an invention being written for him. He has memories but whose are they? Someone keeps referring to him as Detective Giovanni ‘Rex’ Matsuko but that may be a mistake, maybe he’s being confused with someone else, maybe it’s a name attached to a confession, but maybe, just maybe, it’s all terribly real.