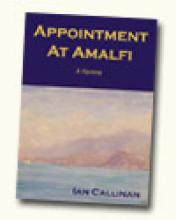 A world-famous and wealthy Australian film director, Roderick Lily, lingers on through the unfashionable off-season in beautiful Amalfi near Capri. He has become melancholic. He has left a disquieting mystery behind him in the Gold Coast Studios because he has left his greatest and his final film incomplete. Lily, uncharacteristically, sells an exclusive interview to an illustrated gossip magazine in London for a huge fee. What are his motives? There are scandalous rumours about the bizarre death of his wife on a fashionable Sydney beach decades ago. He now promises that he will reveal the truth about this scandal.

But frustratingly for the young London journo, he first leads her on a tantalizing guessing game through the plots of his major films. He procrastinates, he philosophises. He insists on taking her around historic Herculaneum. In the meantime, the corrupt financiers of Lily's final film may have hired a hit-man. They will do anything to stop the film being completed and released.

A near fatal boating accident for Lily and the journo off Sorrento is the trigger for a dramatic crescendo. There is a sudden flashback to the Sydney beach thirty years ago and a horrific scene is re-enacted.

This is a whodunit with an existential twist in the tail. In the end Callinan creates a drama of illicit love and crippling remorse. Beneath the glittering surface of fame and triumph lurk a fatal error and an unforgiveable sin. There is a justice that is beyond the law and it comes from within.